well done for getting it back up and running, it looks great.

Thanks guys! Car is currently at the MOT-station

Got news.. sadly failed the MOT due to some BS. There was a brake balance difference on the rear. Never noticed anything of that, but whatever. Decided to let the garage fix it, but it will be done after the weekend.

Is the shade of blue used in you primary paint colour a coded colour or a personally created one?
1 x

Flying Scotsman wrote: Is the shade of blue used in you primary paint colour a coded colour or a personally created one?

Puma managed to get his fresh MOT today. Really happy with it

It's been a while since I've done an update on here and basically nothing happend in the meanwhile. Car is driving really well and doing everything it does. Only thing I changed the past 2 months is the ECU for a Pumanoob's Racing Puma mapped TAPE ECU.

Will be changing the suspension beginning of next year for some fresh and 'better' coilovers hopefully. Will also change a few other things to the suspension to make it an even better handeling car. Will also be changing to 16" wheels for the summer with some Advan AD08R. They are the same model wheels I currently have but only 1" bigger and are originally used in the German Puma CUP and 7,5J wide. Freshly painted in Moondust Silver: 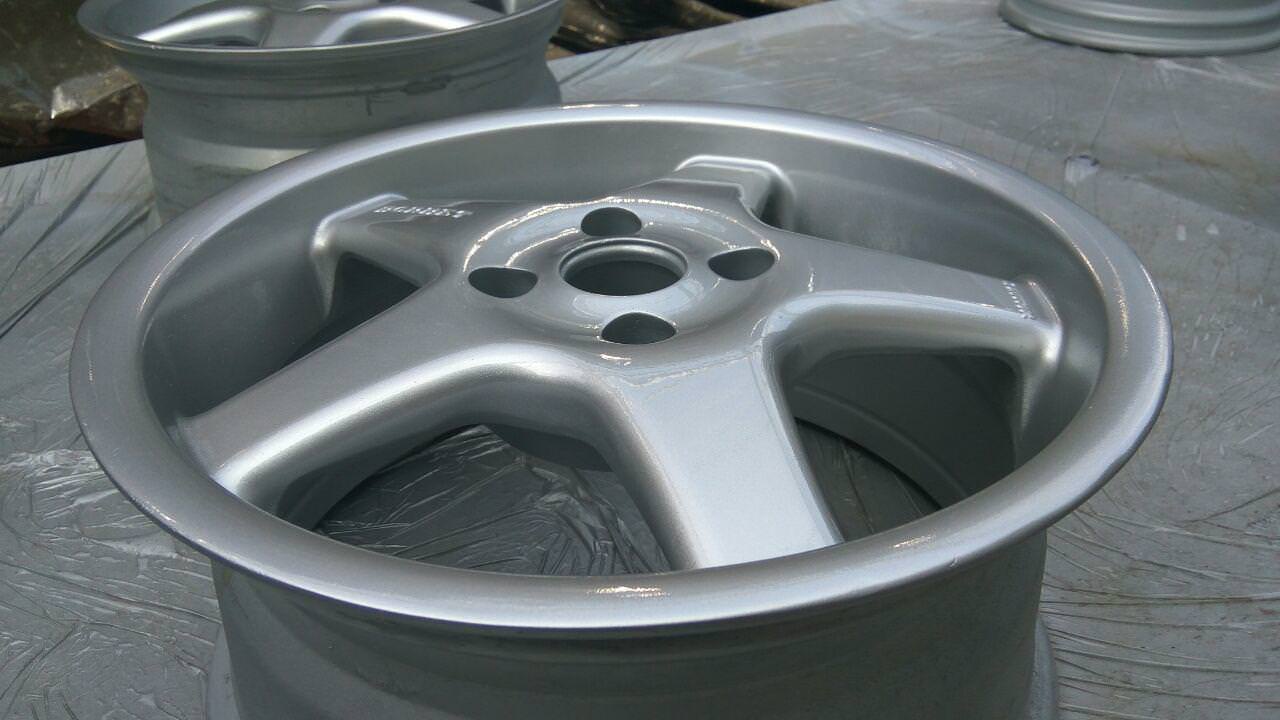 Turbo project is a bit on the backburner for now. I do almost have every part for it though. Will hopefully continue this project someday, don't really have enough time to complete it and test it now.
2 x
Project Smurf Blueish - http://www.projectpuma.com/viewtopic.php?f=64&t=22261"
Top

Brian' wrote: ↑
Tue Mar 22, 2016 8:46 pm
Finally bit the bullet and brought the Puma to a welder to get rid of all the rust. Luckly it's only one arch and a few sill bits to sort out. Other arch is in mint condition even in the arch itself (interior)

Made some photos over the weekend of what I've done, as seen in the pictures you can see that I removed the sound deadening (most of it I forgot a few pieces).
loving the xr3 wheels really suit the puma pity you couldnt buy them

I have done this because after it's welded it will get a full respray (in and out). Guess by who? Yep.. by me

- Color is still a secret, althrough is quite flashy!

Now for the pictures:

All bits removed. Drove around a few days without any interior at all only one front seat. Was so noise but so much fun

Another reason it's getting welded is if I needs to go to MOT now it would probably fail on one vital bit.. Which is this crusty bit on the sill:

Besides that bad bit the rest seems to be pretty solid, no holes in the floor at all! The welder said it shouldn't be too much work so hope to have the car back in 2-3 weeks. Then the hard work for me begins.. the prepping of the paint!

Also managed to test fit my brothers wheels for his XR3i. I think they looks really good, however can't convince him to sell them to me

Will try and keep this thread up to date over the coming weeks/months!

All the bits and pieces are on now and we (me and my brother's) assembled it in more or less two days. Everything went really smooth and the end result looks really awesome.

Few things left to do now, let me sum it up:
* Tax, insure and MOT it
* Give it a darn good wash! It's really filthy of sitting in my grandpa's storage for two to three months.
* Polish it to a more uniform finish, order some orange peel pads which should remove most of the imperfections it has! If that somehow fails I might try some wetsanding..

* Paint the brake calipers a different colour (most likely gold)
* Custom midpipe so that it doesn't sit as low as it sits right now.
* Find some 16" wheels that fit just right (An example are my brothers' Compomotive CXN2's, fitted in the pictures above)
* Drive it!

I haven't posted an update here for a long while. However the car has progressed a lot! It's now rocking a TD04HL-19T Turbo from Kinugawa with a custom made manifold by someone local. The rest I made custom myself. It's already running for 6.000 KM's without any problems.

It's currently running around 0.7/0.8 bar of boost and making around 200whp/320nm torque. Drives fantastic! Still a lot of buttoning up to, but considering the time I have it'll take a while before everything is finished. The car is now used for my daily commute of around 60-70 KM's a day.

More of the progress and photos can now be found on my Instagram: https://www.instagram.com/boer_brian/?hl=nl

When I have time I'll try and write up something more detailed. I should have enough pictures to write a good story

Top job. Something I'm interested in doing in the future as well.

What is the response of the engine? I.e. does it pull from 2000 rpm or needs more revs?

Have you replaced internals (conrods in particular)? What sort of fuel economy are you getting out of it?
0 x
Project JASAPP
http://www.projectpuma.com/viewtopic.ph ... 70#p327270
Top

What is the response of the engine? I.e. does it pull from 2000 rpm or needs more revs?

Have you replaced internals (conrods in particular)? What sort of fuel economy are you getting out of it?

It starts pulling from around 2500/3000 revs. Everything is stock only used a decompression plate, SR20DET 550cc injectors, uprated fuel pump and an Emerald K6 ECU.

Fuel economy is more or less the same as before. I get around 450km per tank
0 x
Project Smurf Blueish - http://www.projectpuma.com/viewtopic.php?f=64&t=22261"
Top
Post Reply
194 posts