TylerB wrote: I never had any issues with rattling heat shields, but if needed I would also take out the carpet to repair properly. Are the existing fitting screws broken? Can you not just attach the shields with larger washers to them?
The more I see this colour the more I like it, great Puma.

Some of the existing fitting screws are broken and some aren't so it's just the case of repairing a few. I am going to use larger washers, that's for sure!
0 x
Project Smurf Blueish - http://www.projectpuma.com/viewtopic.php?f=64&t=22261"
Top

Been way too long since I've done an update on this! Car is really behaving very well. Not had a problem whatsoever.
Still haven't been able to refit the heatshield though. Should be doing this in the coming month or two.

Been really busy the past couple of months with gathering parts for an upcoming project. As I'm not able to buy all the parts in one go I already bought the parts I can already install. One of which is gauges. But before I could install the gauges I needed some sort of dashpod. Didn't want them on the A-pillar. So I tried and make them in the vent holes in the clocksurrounding.. This didn't work out as I hoped for so I continued and decided to make them in the clocksurrounding. It turned out really nice if I say so myself!

Pictures of my creation: 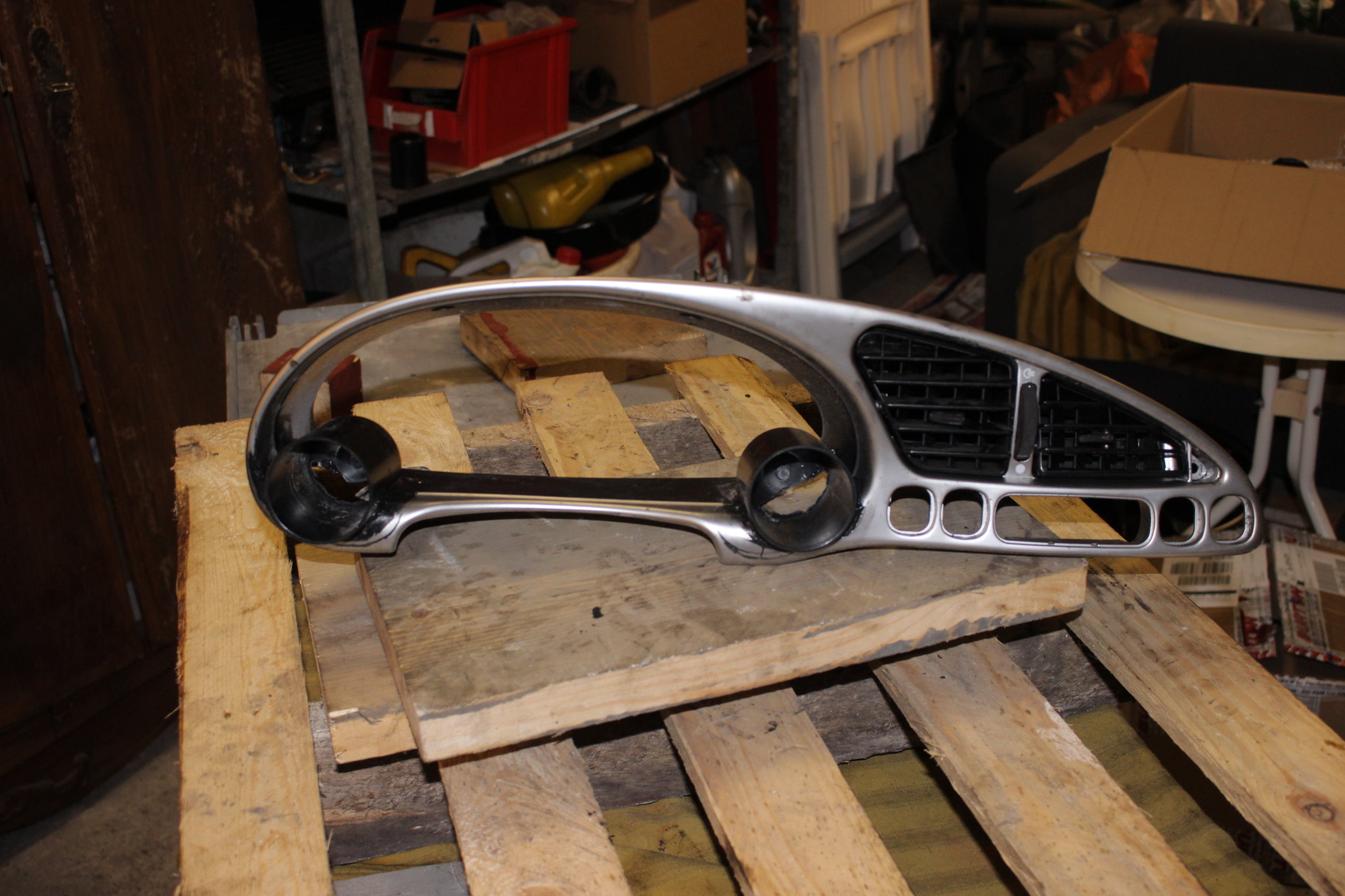 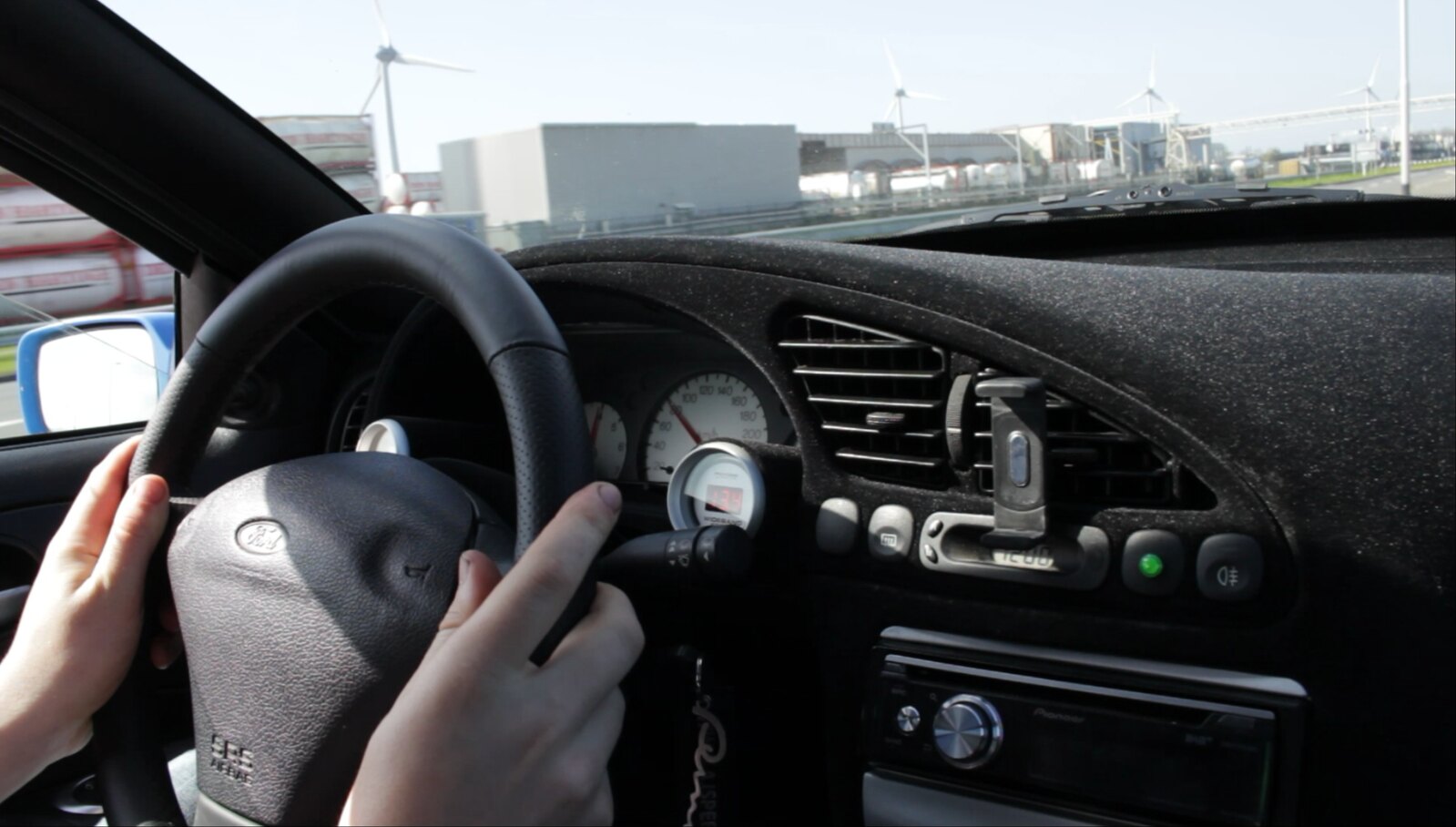 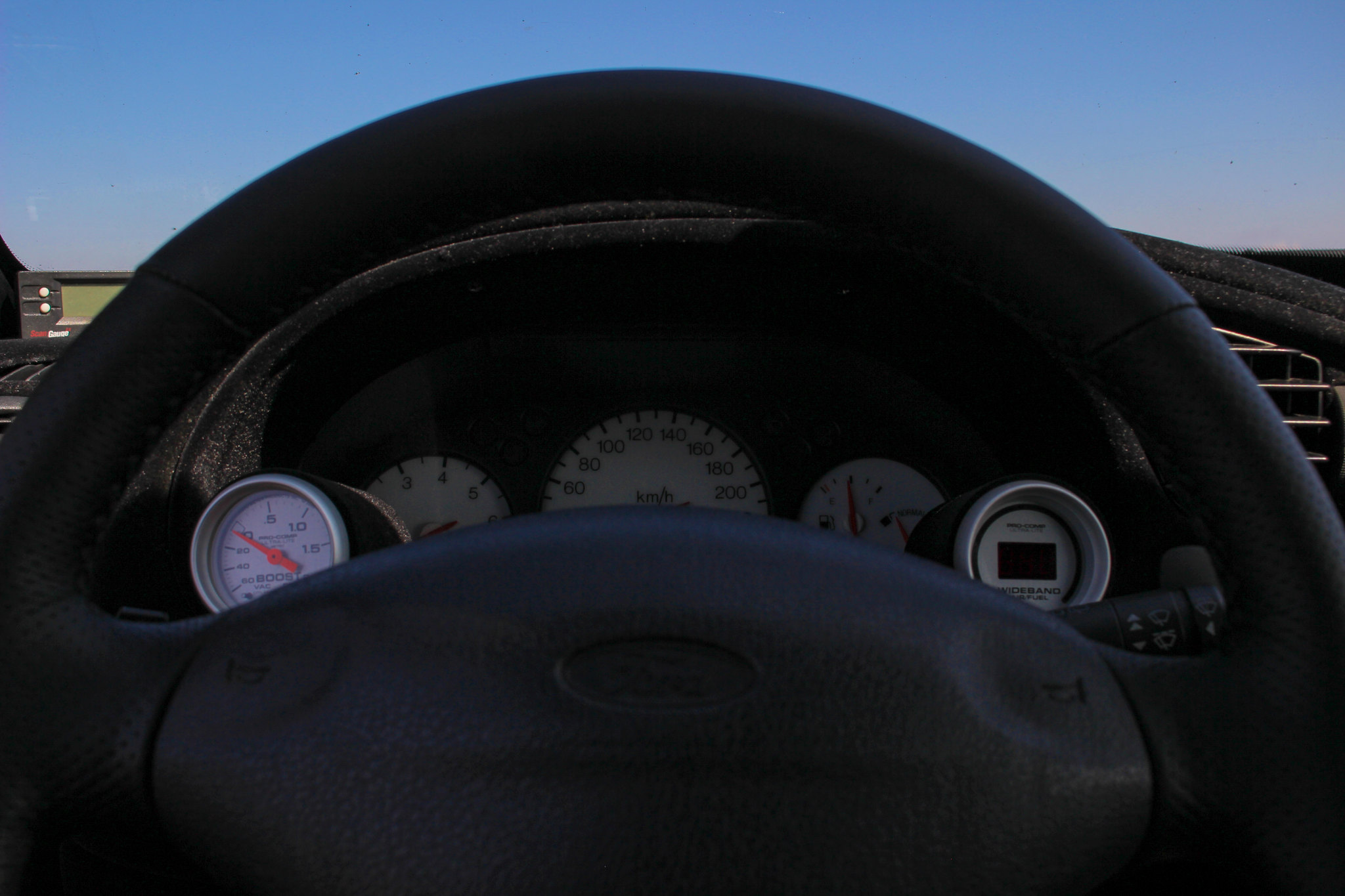 Had it flocked to get it looking all nice and flat. Couldn't get the finish I wanted in the corners of the pod so it being flocked solved that problem! As some may noticed, one of the gauges shows 'boost'. And yes, that's the upcoming project that I'm working on!

I've been looking for more power the past 1-2 years. And decided, after the Nürburgring trip of last year, that I need more power. Thought of going for the ITB route but I'm just more interested in turbostuff.

So the past few months I've been busy gathering parts. Manifold is being made by Chris from LMS, will also be buying uprated headbolts and decompression plate from him. Compression will be lowered with the double headgasket and decompression plate method. Going to use a standalone ECU which will be the EMU ECU. The tuner I use will be making a plug-and-play harness. Car will also go MAFless since the EMU has a build-in MAP sensor. Turbo I will be using is a T25 from the first gen Focus RS. So should spool nice and early.
Have almost bought all the needed parts so will soon start tearing down stuff and fitting stuff. Really looking forward to it! It's going to be a low-boost only (~10psi/0,7bar). Hoping for around the 200bhp mark.

Been a while since I updated my project. This was due to something that accured two months ago. Two months ago I got involved in an accident with my Puma. Causing mostly damage to the rear end

At first it seemed like nothing was wrong. Car drove fine as well.

Took it straight to our workspace and tried opening the trunk, not budging.. The lock was pushed in. And I immediately had the feeling that everything was bended out of place. After eventually removing everything I was greeted with this:

Completely devastated... For a month I though of buying something else. Was thinking of going for a Fiesta MK5 and continue the turbo project in that one. However couldn't find a good example and wasn't really looking forward to start again with repairing rust, paint and so on.

After discussing with the welder I decided to fix it. Welder said it's only the rear panel (And partly the floor, but that can be straighten) and is repairable. Frame is straight so that's good. So I needed to source the panel. Breakers couldn't be bothered removing this part so I was on the hunt for a donor car. Eventually found one for the cheap. It is a '99 1.7 Melina Blue one with 140,000 miles on it. Doesn't drive bad at all

So the Smurf Blue Puma will stay alive and will be going to the welder in the upcoming weeks and should be fixed rather soon than later! I'm positive that it will return in a better state than it has ever been in!

^^ must have been a bit of a whack to bend the floor.

red wrote: ^^ must have been a bit of a whack to bend the floor.

Glad to hear you haven't given up on it, is the person that hit you paying?


Yeah it was quite the whack. The person in front of me and in the rear of me stood completely still and the fourth guy rammed into us with 60/70kph.

Luckely the insurance paid me out. But I much rather have a non damaged car

Just a quick update here. Removed the ´dented´ panel from my Puma. Was a tedious job considering the amount of spotwelds. Also managed to remove the whole rear section of the parts Puma.

Tomorrow the welder is coming to my place and we discuss when it will be welded. Excited.. Hopefully soon!

Managed to drill out the leftover spotwelds to make it a complete weld-in panel. Was not a pleasant job to do but will end up saving me quite a lot in the long run.

Inside of the panel:

Outside of the panel:

Welder came wednesday and didn't have space until upcoming thursday. So hopefully it will be going to his place next week. Shouldn't be a lot of work as it's only 50 spotwelds or so. Most of the work goes into making everything fit (near) perfect. Such as the lights, bumper and locking mechanism. But I'm sure he get it's perfect enough for everything to work. Tried fitting the panel this afternoon but it was refusing to go in. So might need a little persuasion to go in

I hope that the welder can finish the work within about 2/3 weeks so that it can finally drive again after 5 months of standing still. The front of the car is looking really good atleast. Managed to get the panel gaps spot on, apart from the bonnet since this one is dented.

bloody hell glad you are fixing it! is that the nitrous blue or bragger blue?
0 x
Top

SLEEMAN wrote: bloody hell glad you are fixing it! is that the nitrous blue or bragger blue?

It's actually just a colour from the RAL-chart. It's RAL5015 'Sky Blue'. Very close to Nitrous Blue, except that it is a solid colour and not a pearl/metallic based paint.
0 x
Project Smurf Blueish - http://www.projectpuma.com/viewtopic.php?f=64&t=22261"
Top

Brought the Puma to the welder yesterday. He said that it isn't a lot of work to get the panel back in, so I hope that it will be finished next week or the week after!

Pickup the car from the welder yesterday. He truly didn't lie about it being not a lot of work. He delivered amazing work and everything seems to fit how it should be. Even the floor is near perfect flat, you wouldn't even notice that the floor has ever been dented before. You can't even see that it have ever had a new panel welded in. So happy that the panel is finally welded in, heading in the good direction now!

Already started prepping a few things and will hopefully be spraying the primer this weekend and then seal all the joints with Sikaflex. Aiming to spray colour within 2 weeks if everything goes to plan. Then an MOT and I'll be able to drive it once again!

On other news. Also managed to fit the TAPE ecu in my Puma and it run really well on the ecu. Plan on getting the FRP map on it by Erroll just for the time being as I'm not sure if I should continue the turbo-build.
1 x
Project Smurf Blueish - http://www.projectpuma.com/viewtopic.php?f=64&t=22261"
Top

Well done Brian, glad to see you're getting it back on the road again

Proud of you, Brian. Many people wouldn't have had the determination and 'true grit' needed to get that back on the road again. Well done.

Wild E. Coyote wrote: How did he weld it in? Spot welds or MIG? Awesome work, BTW

Hi Sinisa, he MIG'd the spotwelds that I drilled out. So it is welded how it originally was.
0 x
Project Smurf Blueish - http://www.projectpuma.com/viewtopic.php?f=64&t=22261"
Top

Just read it all in a few sittings, very nice car, props to you for sticking with it! In regards to the heat shields just bin them, I worked for various dealers over a 9 year period and we removed many heat shields due to rattling but didn't sell a single one! The manufacturers overbuild the exhaust system and you'll never have a problem without one!
1 x
No more Puma

Back with another update. Did a lot over the past two weeks. Managed to paint all the inside pieces such as the bonnet and tailgate. Also primed the rest with a filler primer and sanded it back with 1000 grit ready for the blue basecoat. Which will hopefully happen this weekend

Here are the photos of the progress I made last weekend:

Before I painted the rear panel I first sanded it, primed it and sealed the seams with Sikaflex 221 (brilliant stuff) after that I painted both in and outside of the panel. 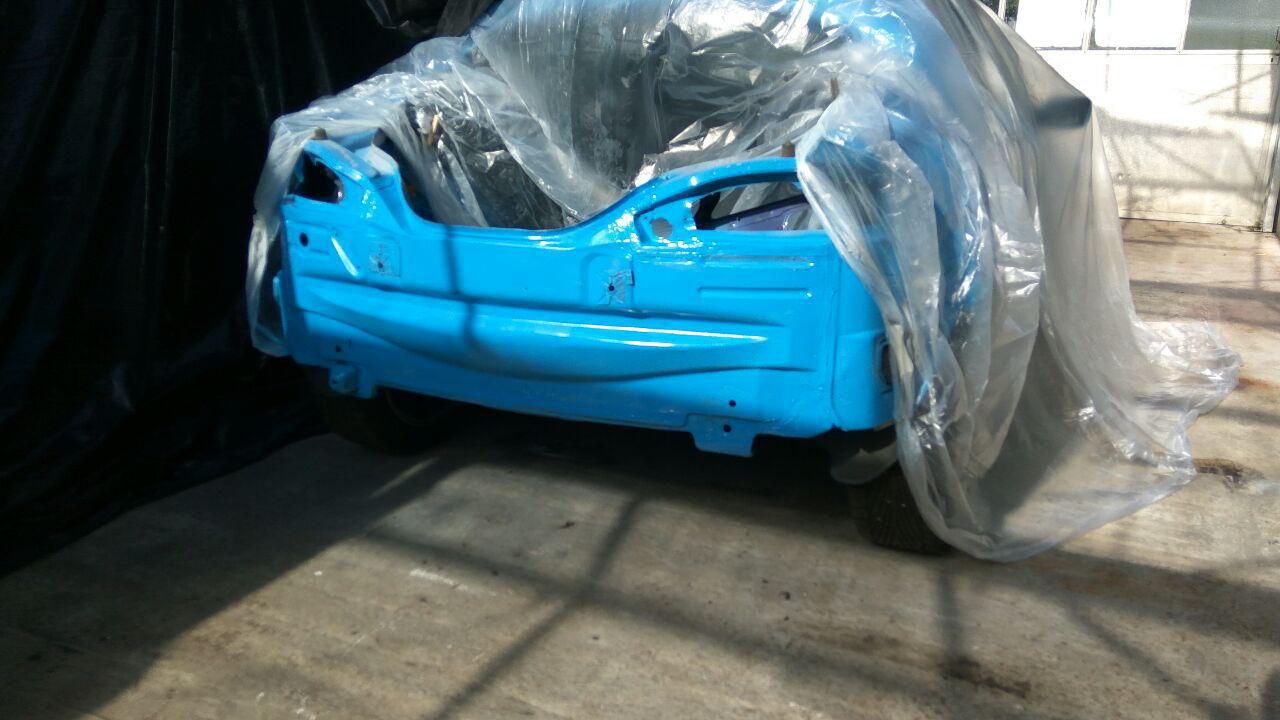 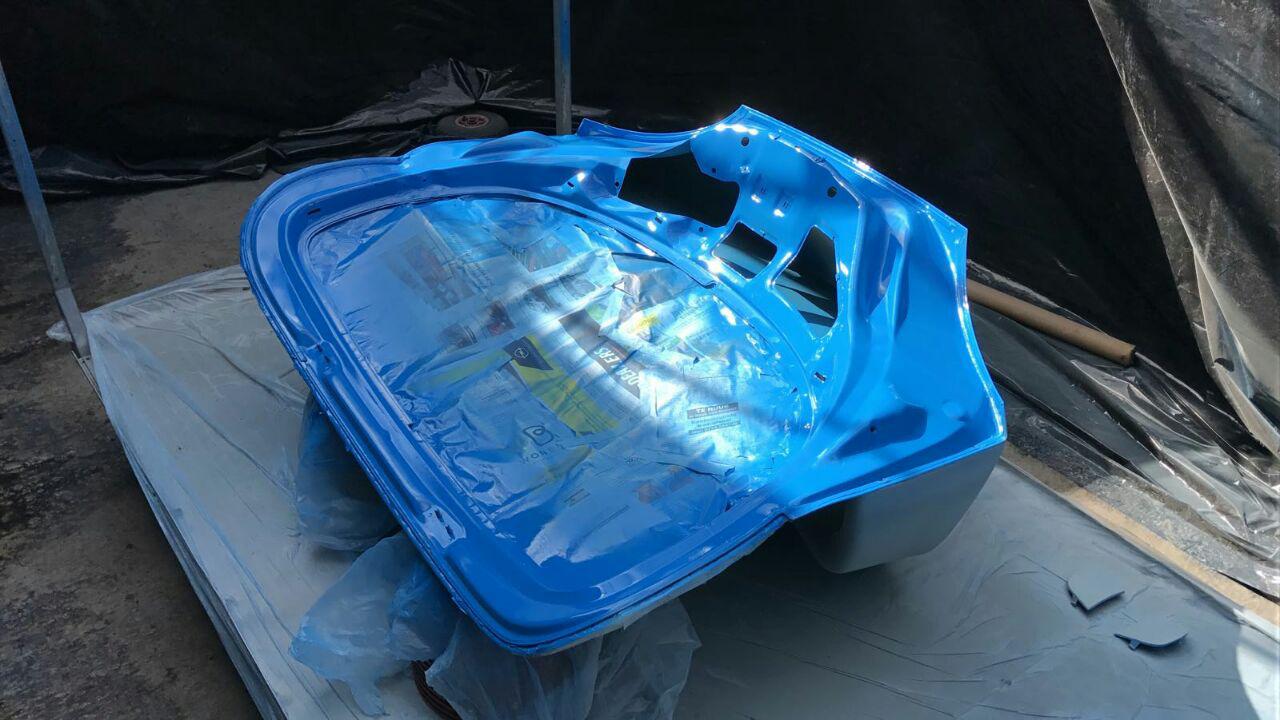 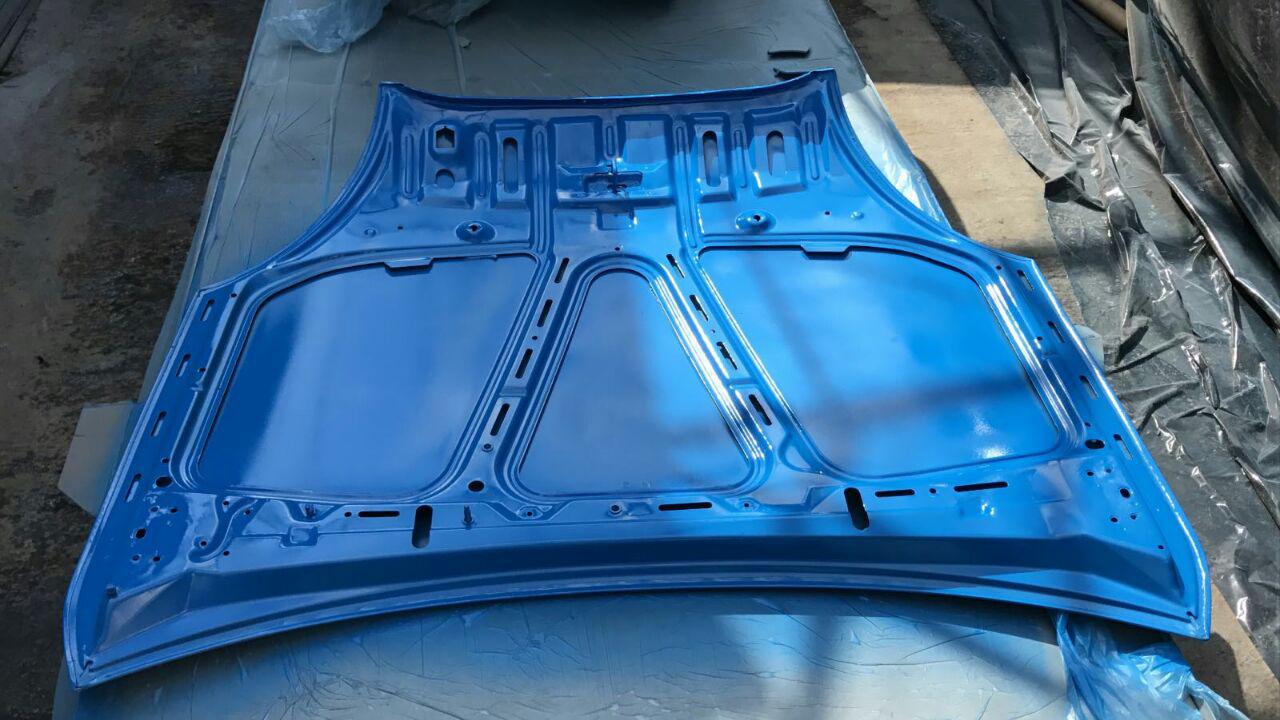 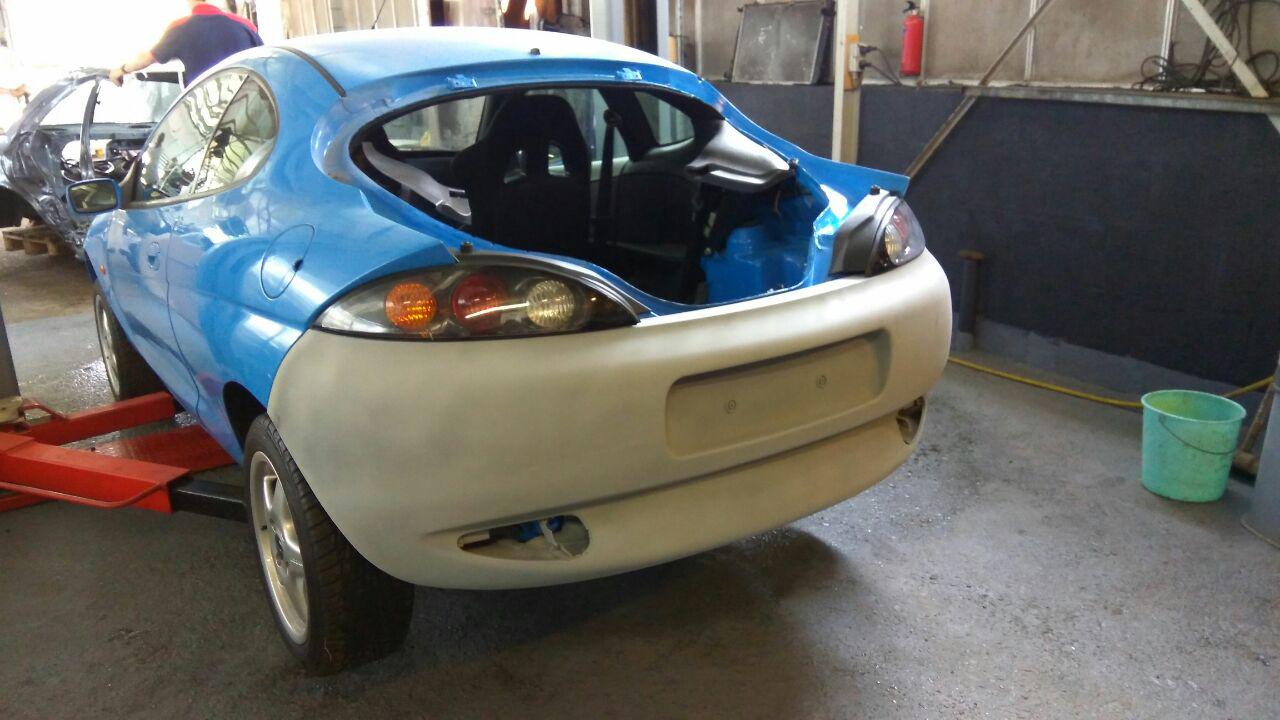 As managed to repaint a few bits on the underside where the underbody material was a bit thing/forgotten. But haven't made a good photo of that. Only thing that's a let down on the underside now is the rear beam. But I might be switching to the eye-beam from the parts Puma I got and refurb that before it goes on.

Really happy with how the body lines on the rear bumper came out. Was a bit worried about this considering the new panel that got welded in. But turned out really good! 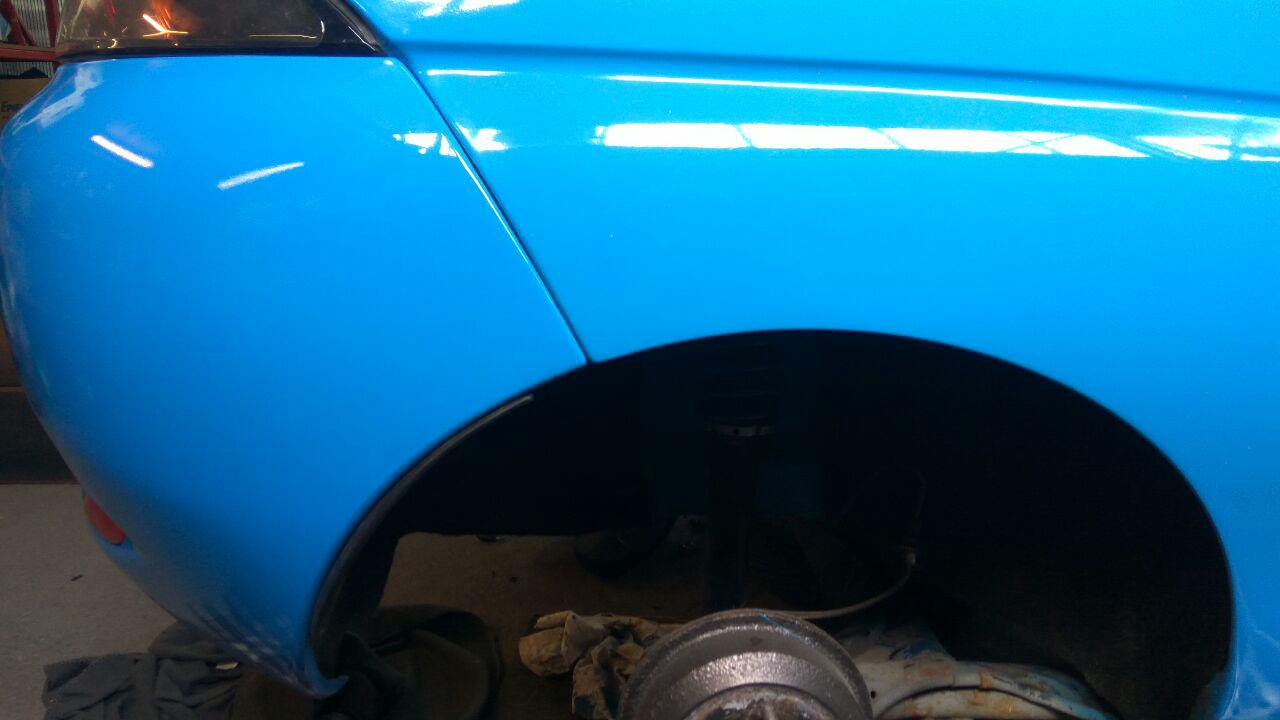 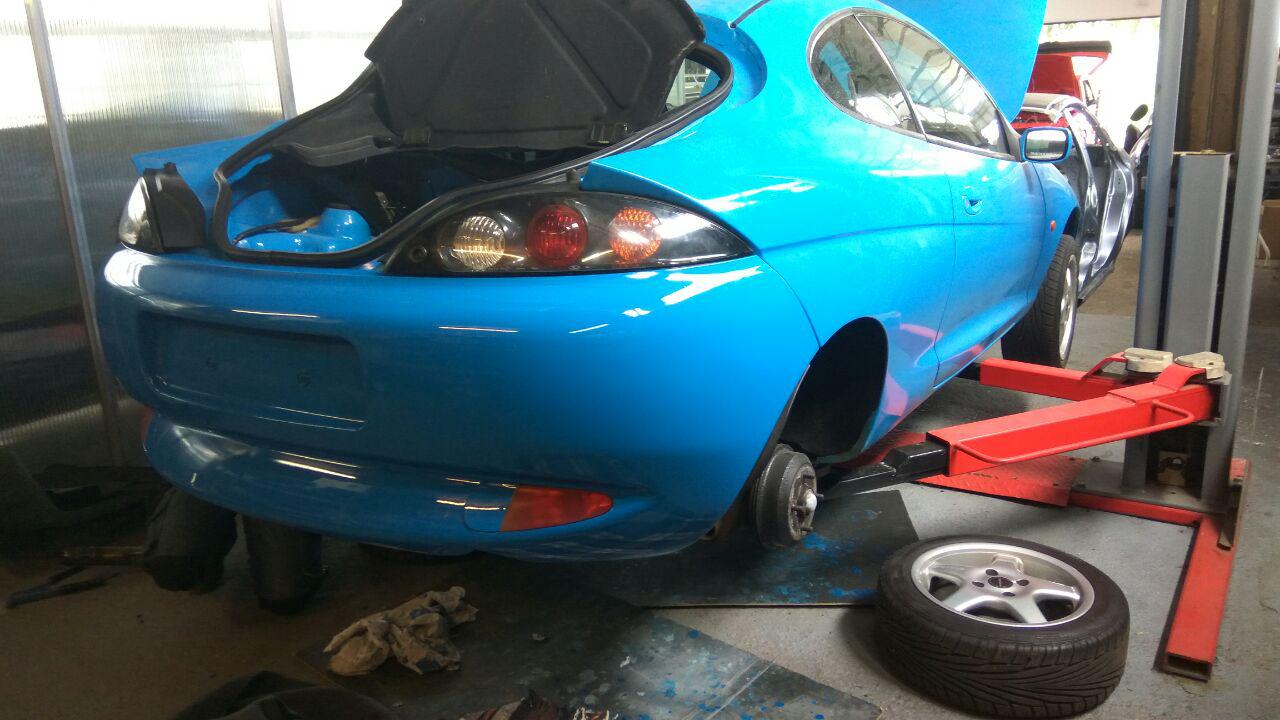 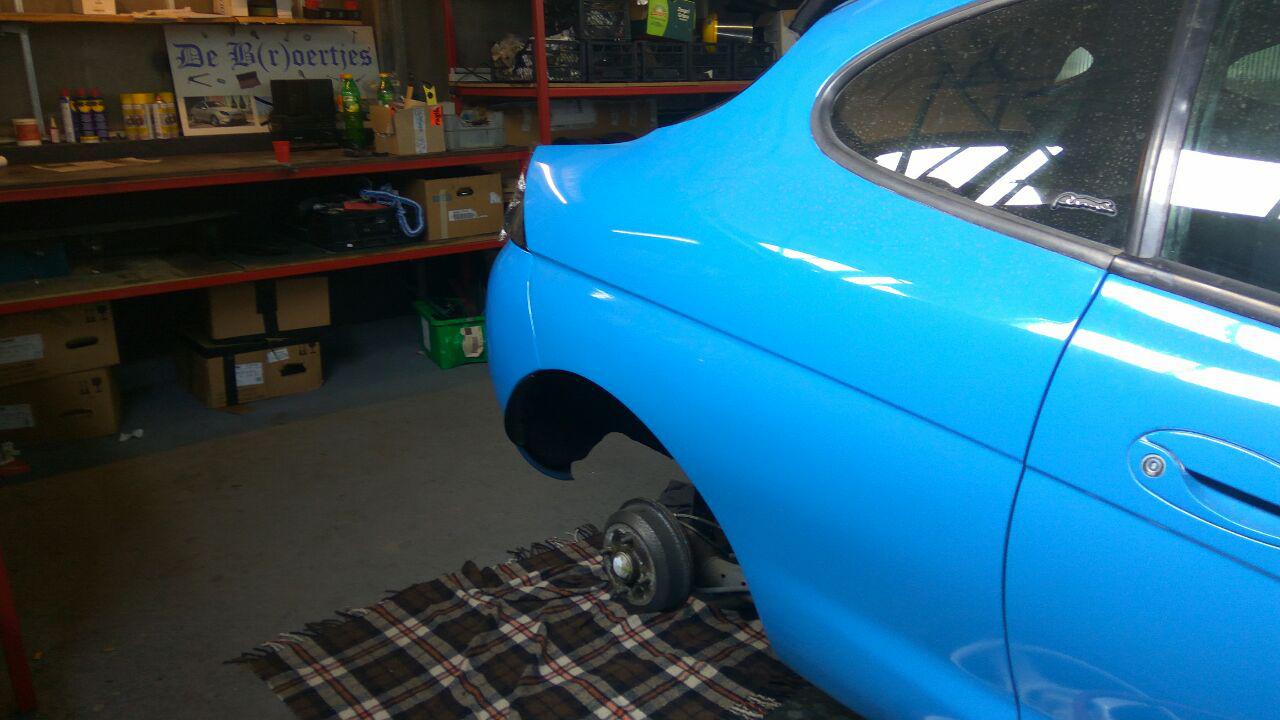 Also managed to completely strip the Melina Blue donorpuma. It's now ready for it's final rest place, quite literally as it was in really bad shape anyways. One of the quarters was full of body filler on some places around 0,3-0,4cm.. 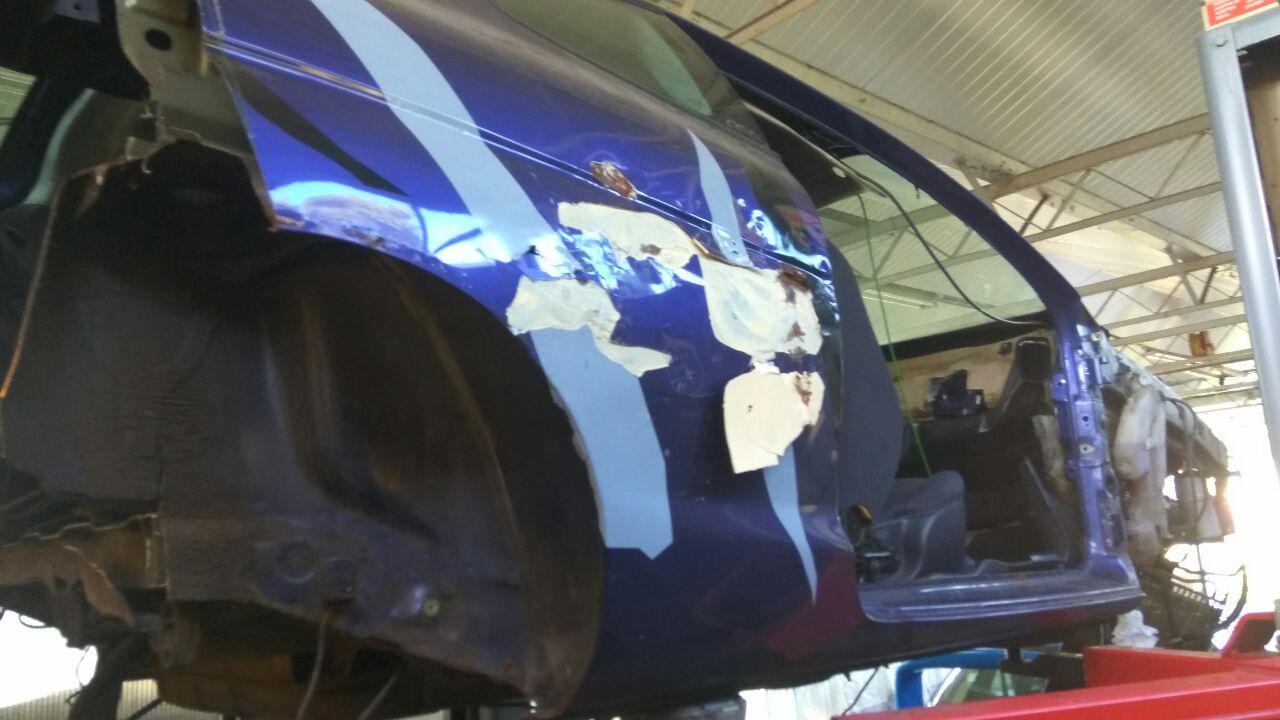 Tonight I managed to fit the freshly painted hood back on the car and got the body lines pretty spot on. One side has a little bit more gap, but I'm not that fussed about that right now. It will close fine and will still look really good. 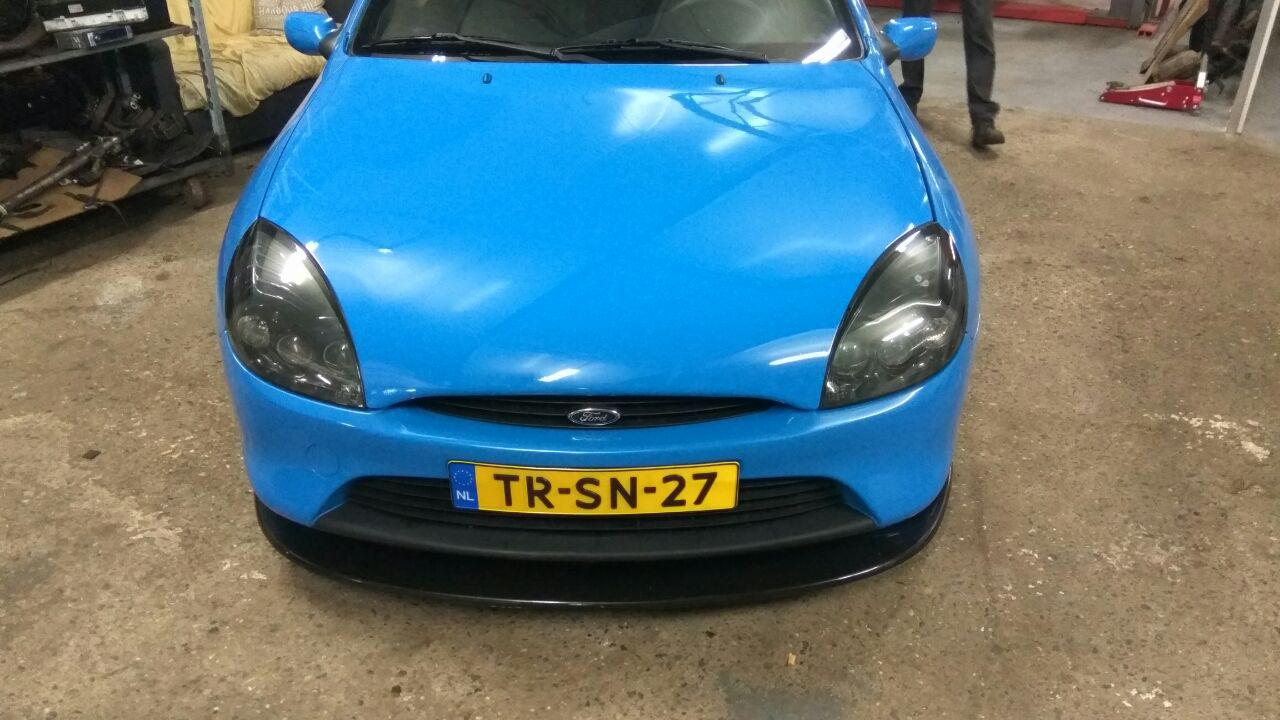 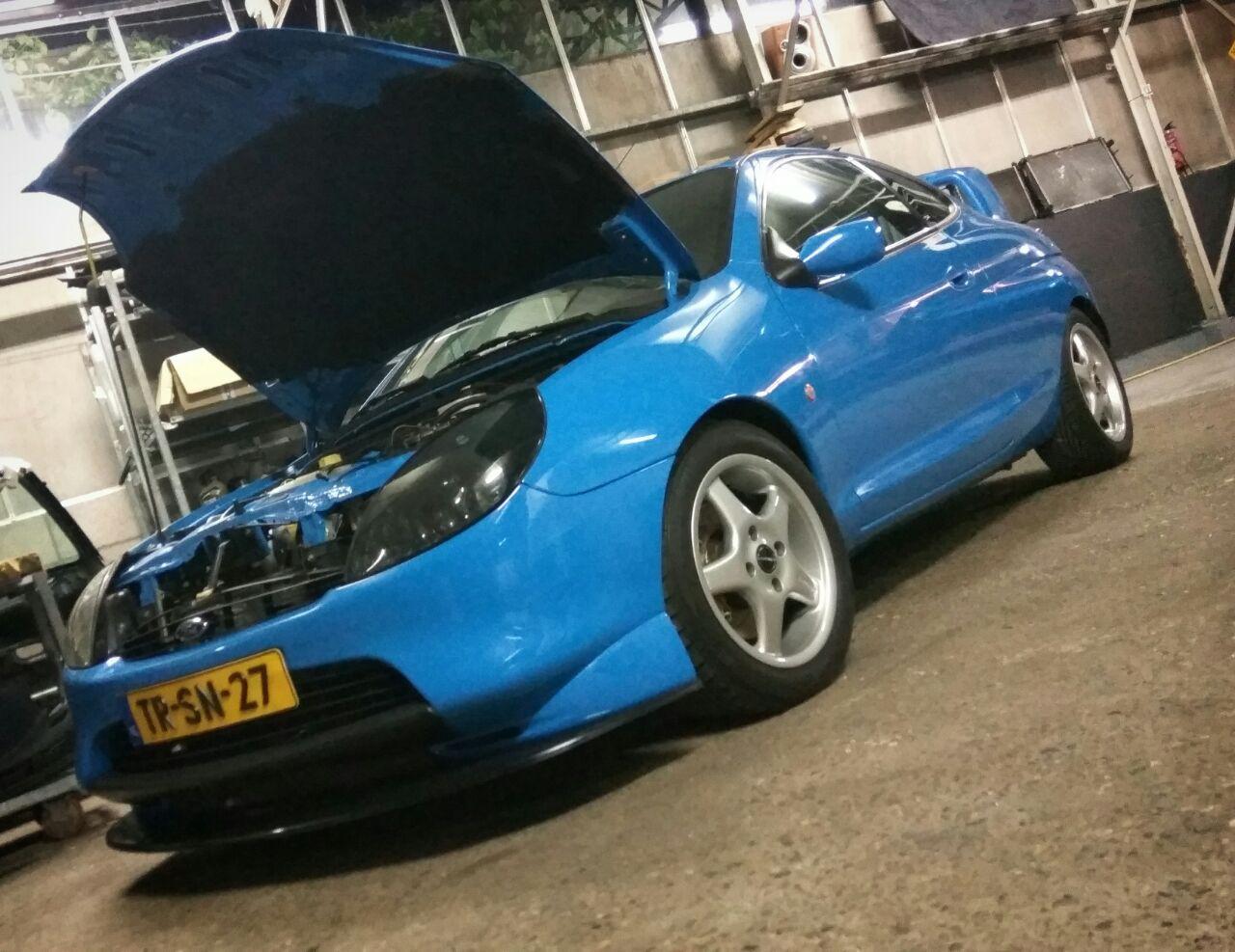 An overall picture of the Puma. Really happy with how it looks right now. Loads of little things to do to make it perfect, but they don't really have priority. Tomorrow it's MOT-time and after that I will be able to enjoy the Puma again for the first time in five months!

Thanks Barry. I'm confident that it will pass with flying colours