Hi Guys
Thanks for the positive comments but it's too far gone for me to spend more time on now and just ideal as a donor car to keep mine running for another 20 years. I just need to build super shed now

I might have a home for the inner wings Barry of it gets to that stage with it... Sorry!

Hi Dan
I'm not promising anything this time as the guy who took the last one away made nothing on the deal at the scrappys as the car weighed less than 300kg plus taking off the inner wings in a re-weldable state is a mammoth task. Is there a specific bit of them you need?
0 x
2001 ColOrado red Puma 1.7, work in progress.
Westfield SEIW 1800 Zetec.
Building Westfield SEI 2.0 Zetec Blacktop on TBs.
Fiesta Style 1.25
Aprilia Tuono Factory.
1975 Yamaha TY80
Now working on my sons Anglia 105e

Barry that's absolutely fine. Don't do anything that's going to cause a hassle on my say so! I don't actually want much of the inner arches. Mine have been cut and moulded very badly to accept larger wheels so was looking for as much of the lower sections of the inner wings over the wheel opening to craft a new section back in to tidy it up.

It's no issue if you can't or even can't be bothered, please just say.. I'm trying my luck!!

Hi Dan
Panic over, I thought you wanted the whole inner wing!
Can you send me a piccie of the area that you want and if it's do-able I will have a go but the strut towers will have to stay in place as it's going as a rolling shell when it goes. On the other hand if you want to come and fetch it it's yours for free as long as I can have a few bits back at next years Fordfair (if you're going).
0 x
2001 ColOrado red Puma 1.7, work in progress.
Westfield SEIW 1800 Zetec.
Building Westfield SEI 2.0 Zetec Blacktop on TBs.
Fiesta Style 1.25
Aprilia Tuono Factory.
1975 Yamaha TY80
Now working on my sons Anglia 105e

Hi Barry, I've got some photos, so at some point I'll email them over. The whole car is tempting though, especially as Ben and I will soon have finished repairing a trailer we have just bought!
0 x
Top

Hi Dan
It's an 02 reg as well so I'm sure the bulkhead will be better than the one I've already cut out for you, Go on you know you want to

Well with fine weather at last I decided to renew my front wishbones with the ones I'd bought off Ben. The passenger side came off easily as I'd already had all the bolts out and copper slipped them. 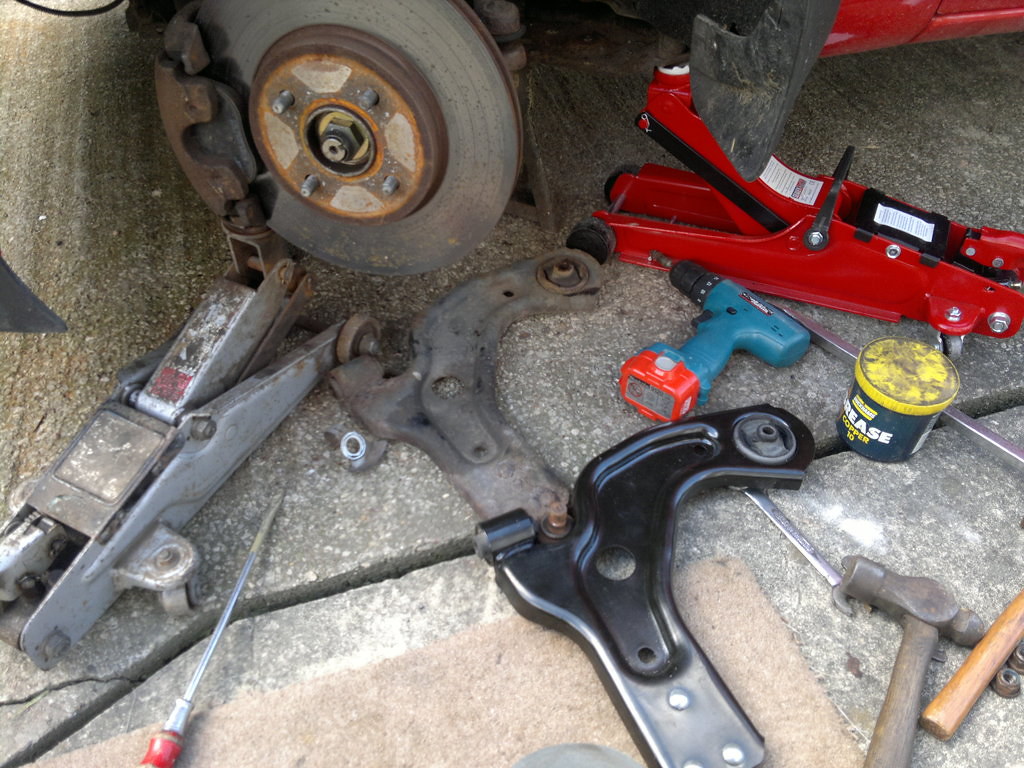 Old and new. The only thing that was tight was the bottom ball joint but a chisel in the pinch bolt slot soon loosened it off. As the nyloc on the existing nuts had gone taking them off I replaced the nuts with stainless steel Nylocs and also used copperslip on the inside of the metallistic bushes and the wishbone bolts so they wouldn't seize again. 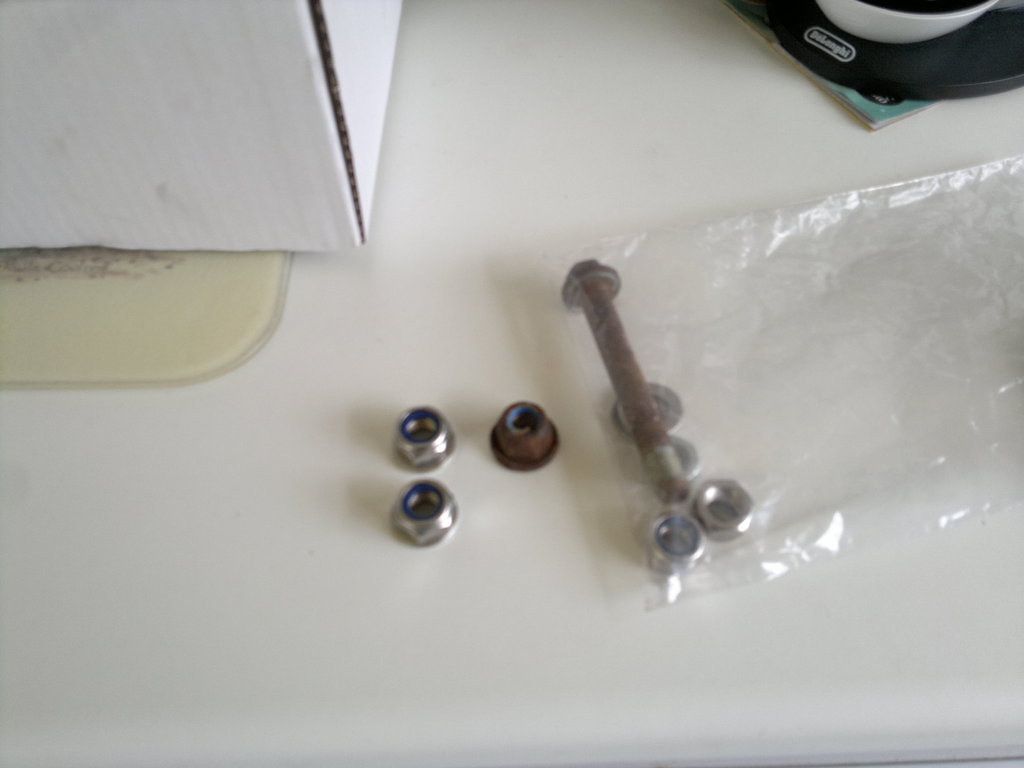 As I'd had a noise that seemed to come from the strut bearings I was beginning to think I'd possibly installed the bearings upside down when I put the coilovers on but on checking they were the right way around. 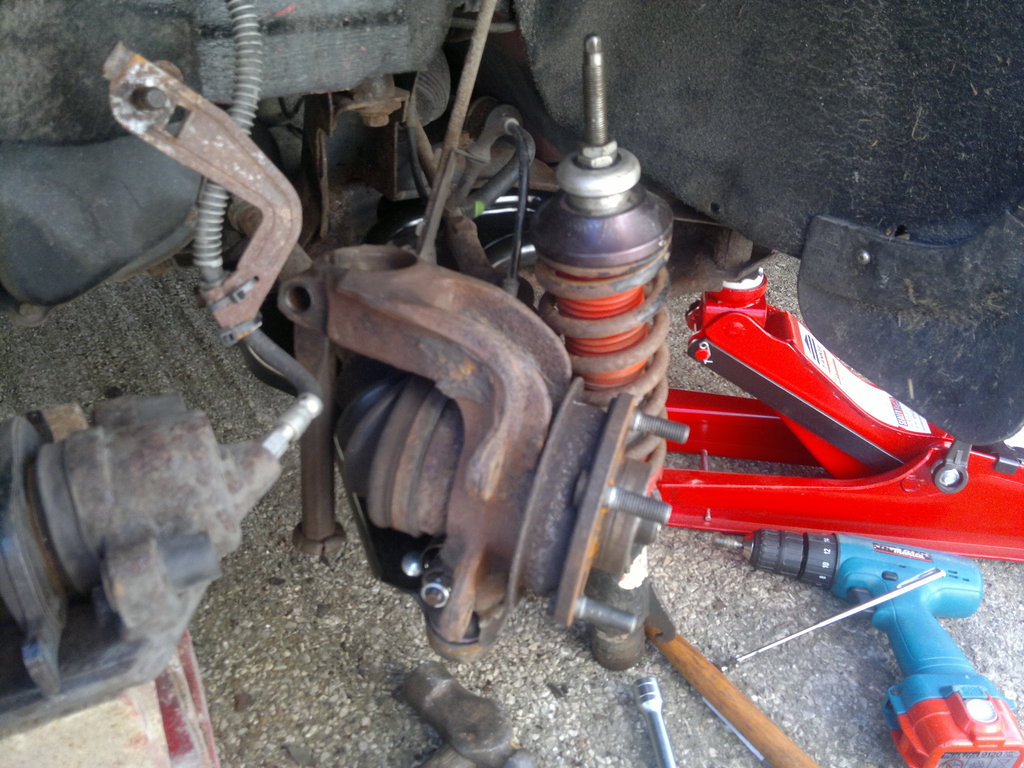 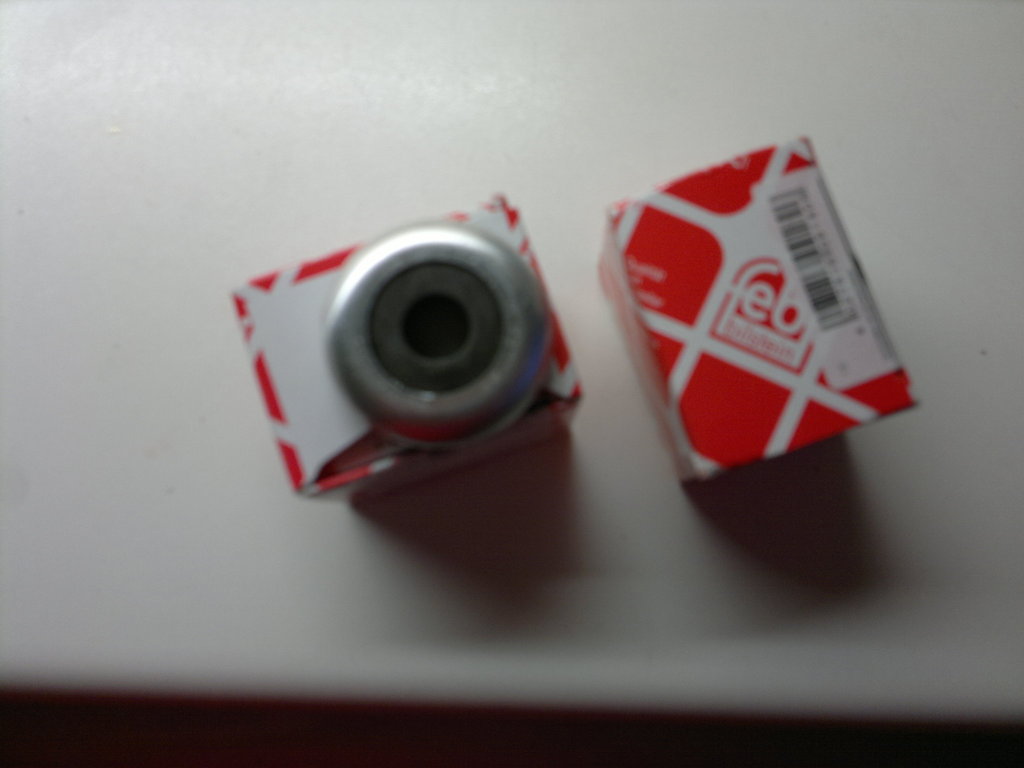 So I put it all back together again, the last job being to torque up the wishbone bolts. It's important that these are torqued up with the suspension in it's normal position so the silver trolley jack under the bottom balljoint is now supporting the weight of the car and not the red trolley jack or axle stand. 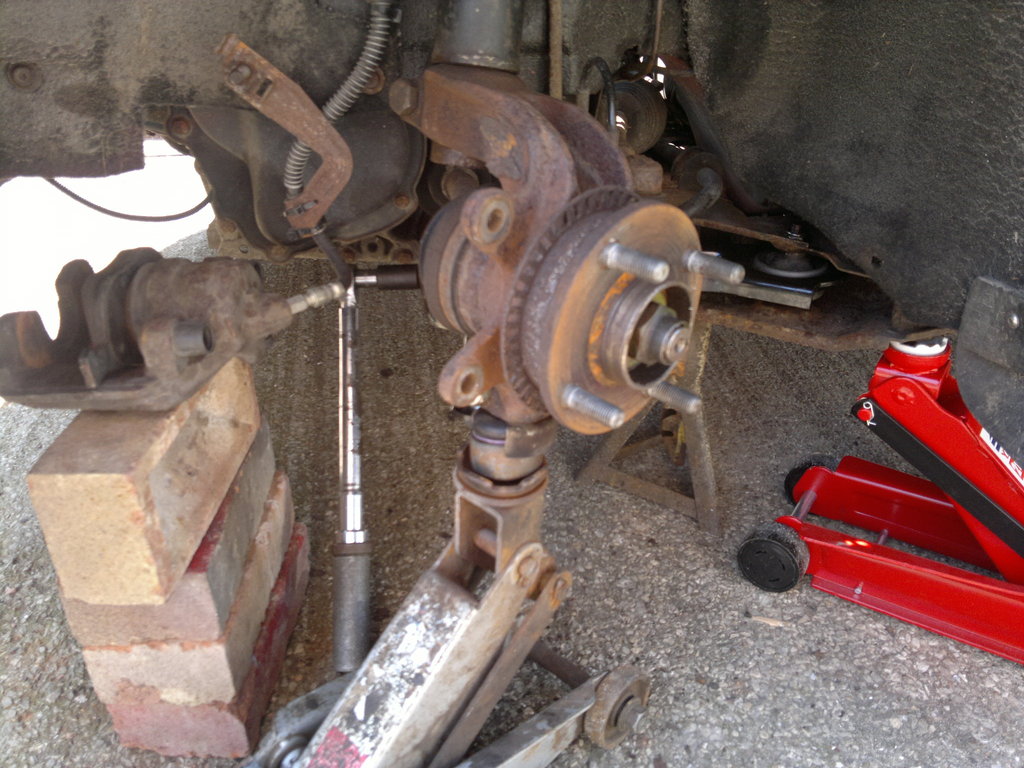 The last thing I did after completing the passenger side wishbone was to put the drivers side front wishbone bolt under tension in the vain hope that it might free itself over night so I put a hex socket on a breaker bar and used the trolley jack to try and loosen it off. 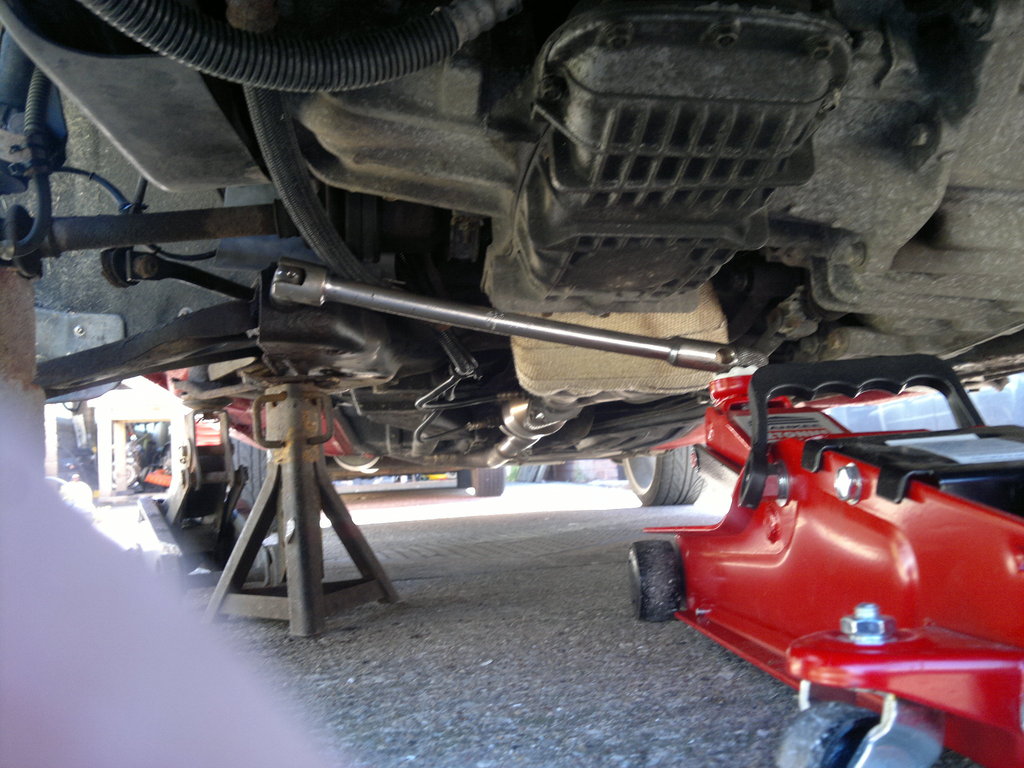 The morning after...nothing doing so I had to undo the nut, about a 16th of a turn at a time(really bad access) so I could get in to saw off the end of the bolt 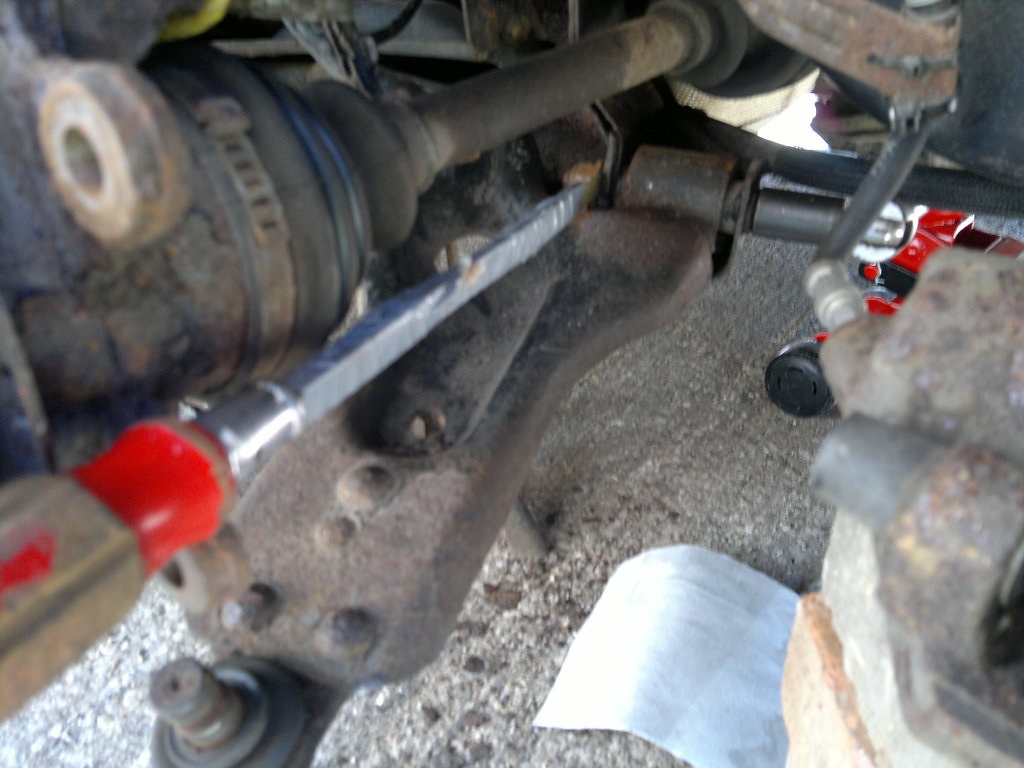 It took a bit of doing but I eventually sawed through the bolt using a long screw driver with a hacksaw blade gaffer taped to it. Then I had to get under the car to grind the head off the bolt which was a right PITA. Once the head was off the bolt I bent the front of the sub frame/wishbone mount so that I could ease out the wishbone and then fitted the new one along with a new strut bearing. 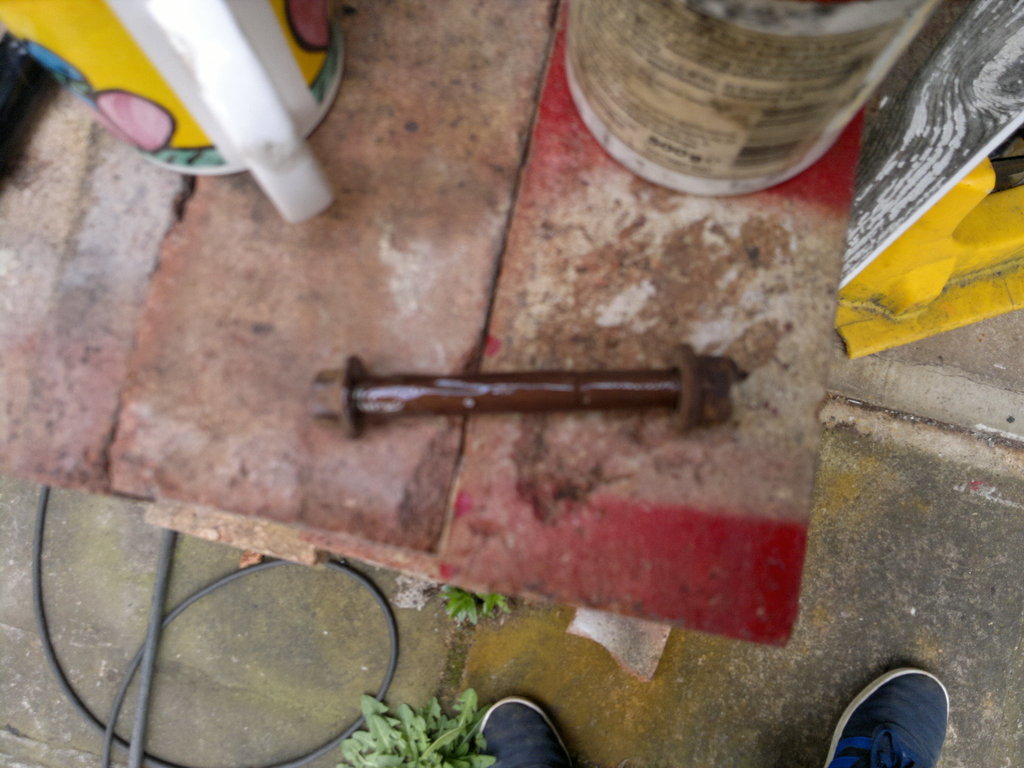 All the bushes and ball joints/clamps are now thoroughly coated with copperslip and should be easy to dismantle if needed.
I also managed to get the sill cover off my scrappy Thunder and these are on my red one now. 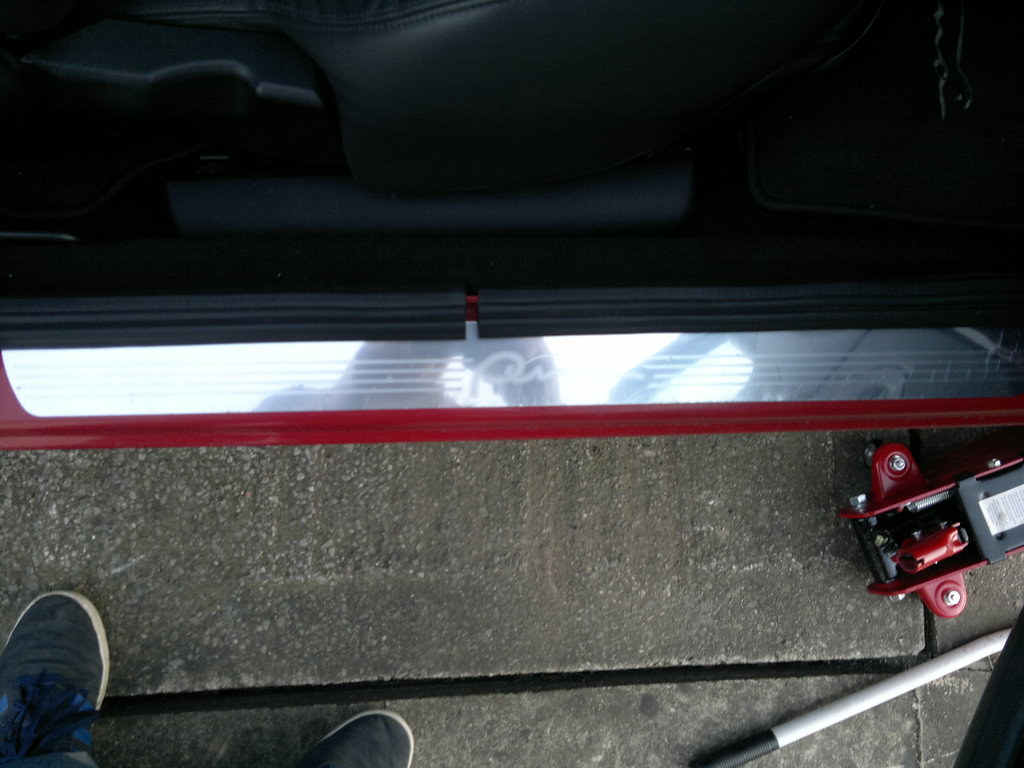 Ooh, nearly forgot, I also ordered 4 Uniroyal Rainsport 3s from Camskill in 205/45/17 size which are apprx 10mm deeper so, hopefully, the ride quality will improve. When these are fitted I'll have it tracked up and it'll be the first time I've paid anyone to do work on this car

Oooh Barry, good work but I'd have had a painting frenzy in there

Hi Barry, I had the same issues with the wishbone bolts, and had to cut mine out, can't remember if I put copper slip on them, so I'll check . On a positive note, I fitted the exhaust manifold at the weekend. Sadly no man hole, jacked the car up as high as I could, undone the gear box mount but struggled on my own, so removed the drive shaft and that worked, just need to extend the sensor, when I find it.

Got that space saver wheel last week, but it's a inch bigger than the frp wheel, so maybe not a good buy, should have done my homework first. Haha.
0 x
Top

Cheers Richard. It's too late now the interiors gone plus I think Andrew may have something to say about lack of progress on his Anglia

Good to see those arms going to good use

Aye, a big thanks to your Ben 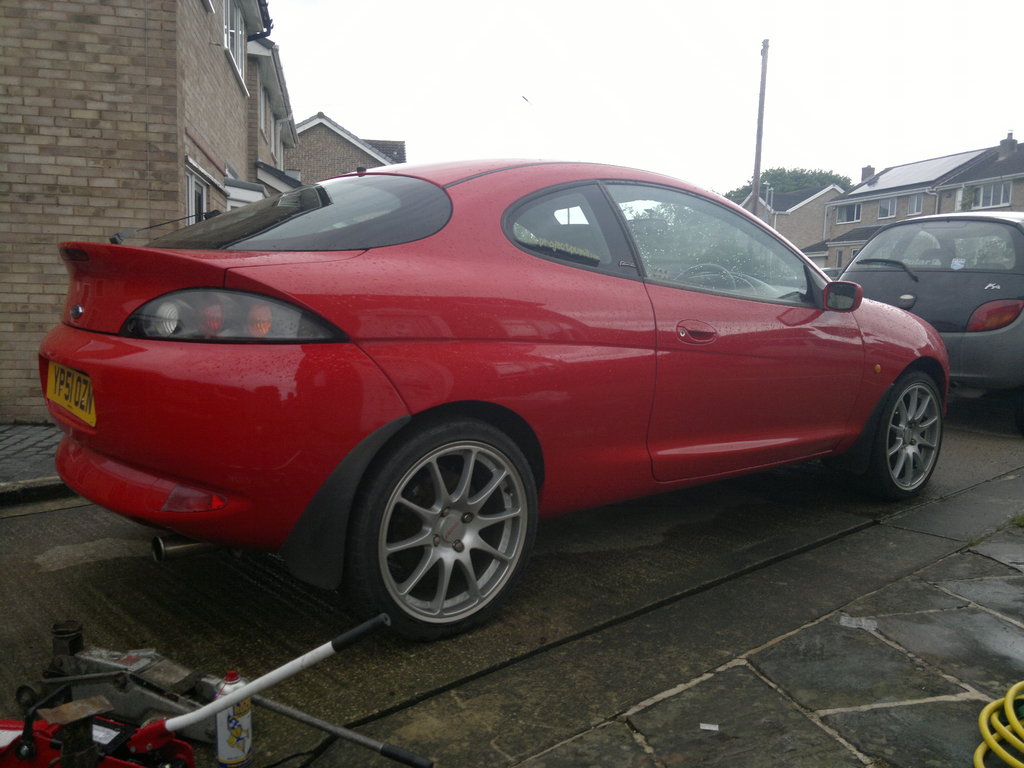 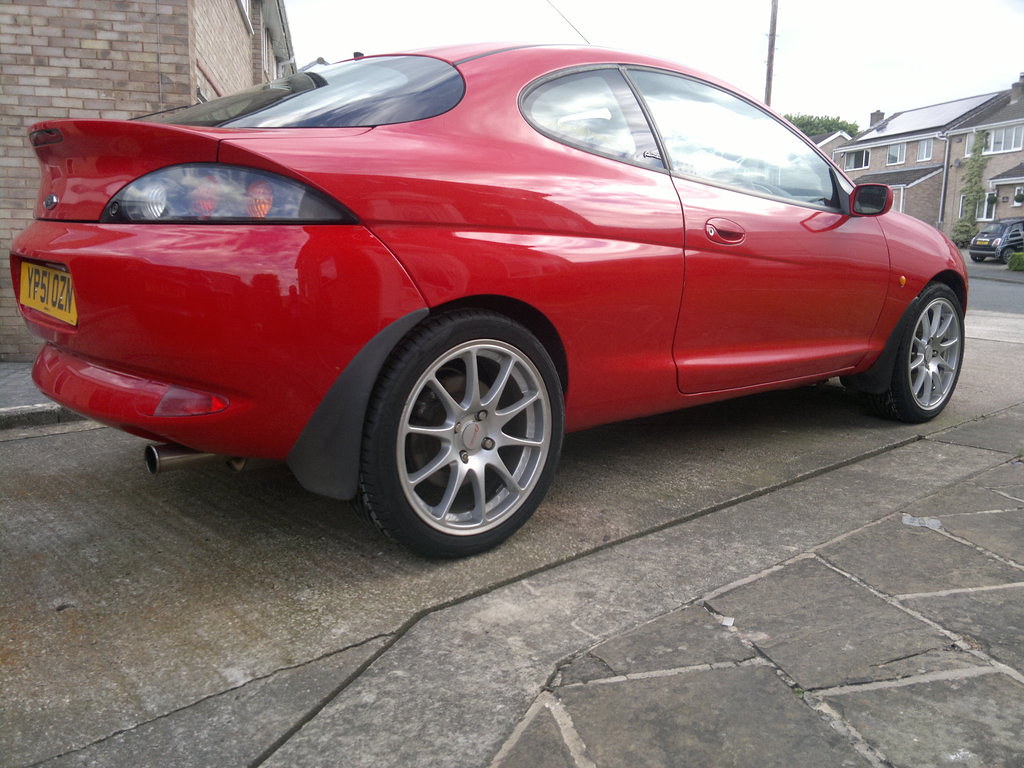 I thought that the new wheel/tyre combo might look a little big in the arches but I think it looks ok now. 2 things left to do now, get it tracked up and take my son out in it with the satnav so we can check the speedo as I think it will be about cock on now so no room to spare at our beloved speed cameras

Hi Barry, do you happen to have the lambda sensor on your new parts car, for the love of god mine won't shift , even with a hammer, it's not for moving, unless it's on a reverse thread. Lol.
The new tyres fill the arches well.
0 x
Top

Hi Richard
I have 2 lambdas on my spares car but I'd rather keep them as they're the only 2 spares I've got as I used the last spare one on my Westy to get it through the MOT this year.
However have a look on Ebay for one of these. 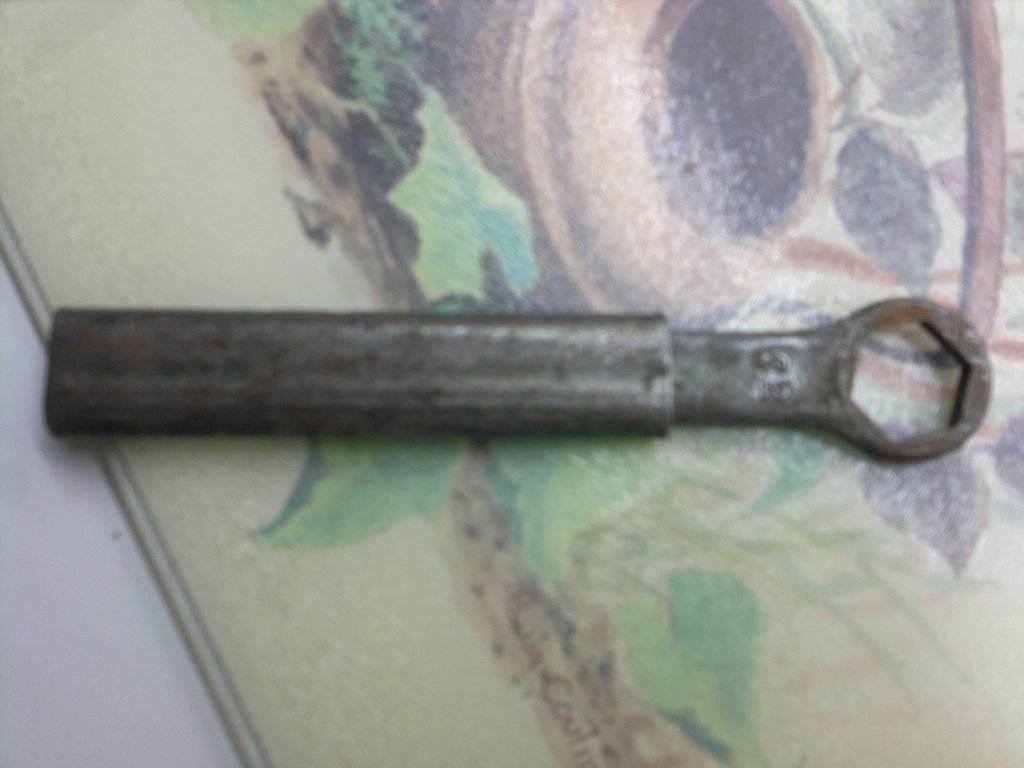 Ok, I'll have a look for that tool, I was using an open ended spanner and it didn't work.
0 x
Top

The proper lambda spanners have a slit in them to go over the wire so if the lambdas super tight they just spring slightly and ruin the nut. The Honda spanner is much better and even the ford plug goes through it. If you can't find one I'll post you mine as long as you send it back.
0 x
2001 ColOrado red Puma 1.7, work in progress.
Westfield SEIW 1800 Zetec.
Building Westfield SEI 2.0 Zetec Blacktop on TBs.
Fiesta Style 1.25
Aprilia Tuono Factory.
1975 Yamaha TY80
Now working on my sons Anglia 105e

Hi Barry your car looks good lowered on those tyres. It would have been better if all Pumas came out of the factory like that - always felt the rear rides slightly too high.

Hi Will
Thanks for that. Aye it's a real risk to mess about with the standard ride height as I found out with the 40 profile tyres and the cheapo ebay lowering springs but I can definitely say it's ok now so that's with the ebay -40 springs on the back, the AVO coilovers as high as I dare put them on the front and the 17" wheels with 45 profile tyres. If anyone on here wants to do it they'll have to remember to grind down the lower inner wing flange otherwise it'll chew up the front tyres.
1 x
2001 ColOrado red Puma 1.7, work in progress.
Westfield SEIW 1800 Zetec.
Building Westfield SEI 2.0 Zetec Blacktop on TBs.
Fiesta Style 1.25
Aprilia Tuono Factory.
1975 Yamaha TY80
Now working on my sons Anglia 105e

Hi Barry, I've ordered the lambda tool you mentioned and a ring spanner, I've been soaking the sensor for the last few days, I'll let you know how I get on when the tooling arrives,

Thanks for the offer, but I'd be scared incase I broke it.

On the Tyre issue, at some point I'll need to get four new tyres, the frp wheels are 40 profile, so I'm just wondering about the 45's, I'll see how you get on over the summer.
0 x
Top

Hi Richard
I hope you have success with either tool but I'm not a fan of them both. There's too much spring in the lambda spanners and bi-hex ring spanners round off nuts too easily. If you have no luck get back to me and borrow mine. If you do break it (which I very much doubt) they're always available on Ebay.
As regards the tyres I'm definitely already sold on the 45 profiles as when you go over a sunken manhole it doesn't feel like you've buckled a wheel like it did with the 40 profiles and the ST170 space saver will be a direct match. I think I'm in the clear with the lower inner wing flange as well as it's not marked the tyres yet but I'll keep my eyes on that.
0 x
2001 ColOrado red Puma 1.7, work in progress.
Westfield SEIW 1800 Zetec.
Building Westfield SEI 2.0 Zetec Blacktop on TBs.
Fiesta Style 1.25
Aprilia Tuono Factory.
1975 Yamaha TY80
Now working on my sons Anglia 105e

Well after all that new stuff on my front suspension it was still creaking a little when I turned the wheel at low speed so I ordered these. 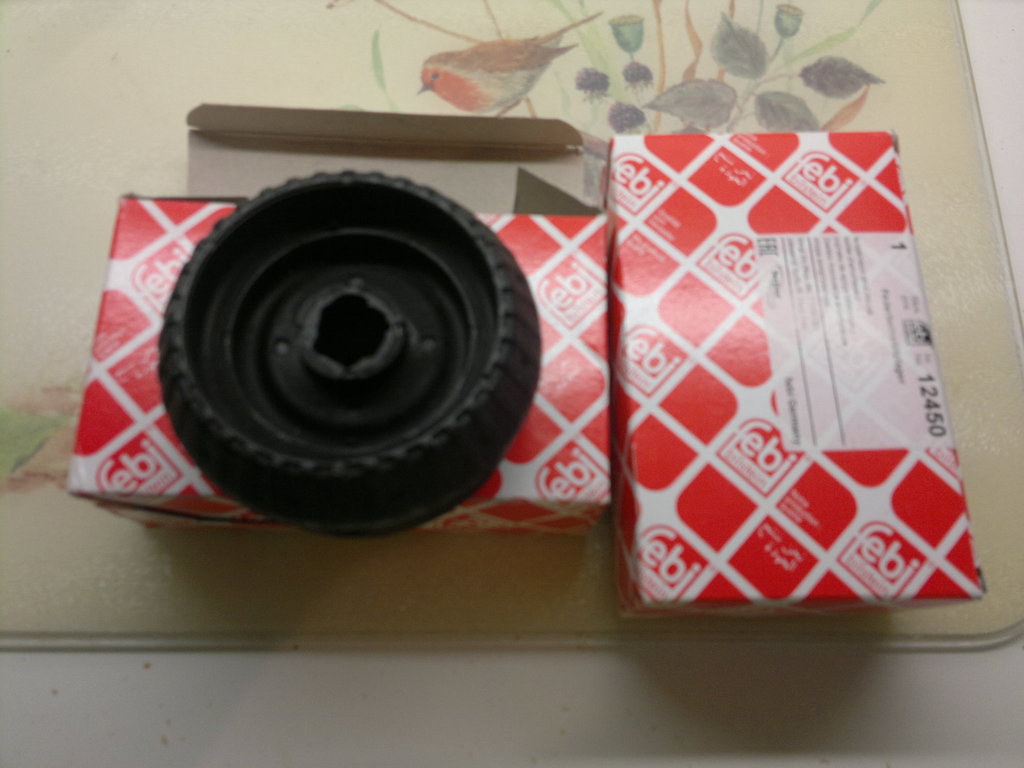 Just as a comparison I think I gained another 2-3 mm of ride height. 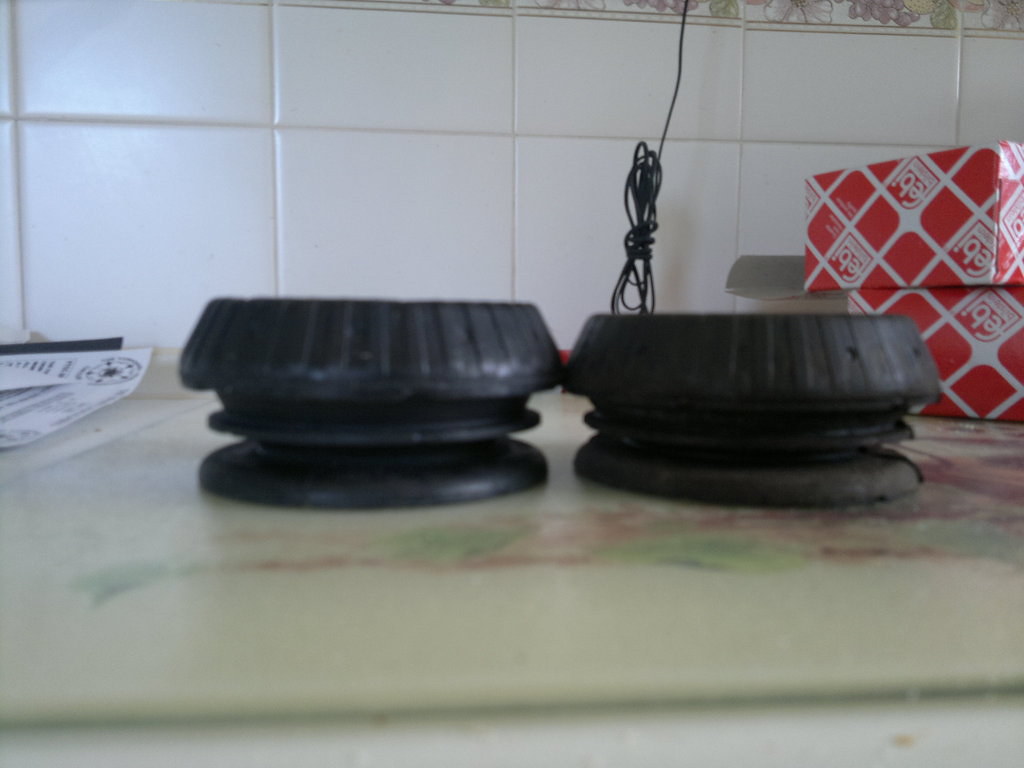 New on the left old on the right

With the coilovers fitted it's really easy to dismantle the top mounts, just wind the spring mounts down press the damper rod in and there's enough clearance to replace the top mount without removing the strut. When I re-tightened the spring platform I put the thread height up to 60mm (out of a total 75mm) so I gained another mm of ride height but I will have to keep clean the exposed threads at the top of the spring platform as there's 8 mm showing now. 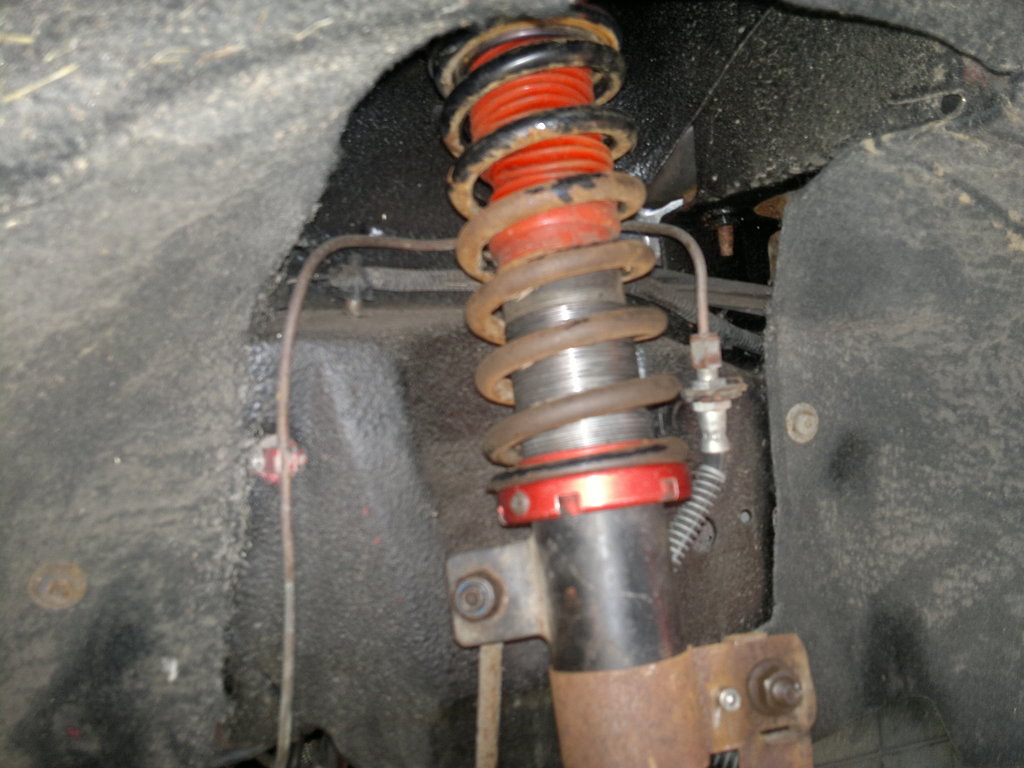 With the suspension built up again and the car back on it's wheels the gap between the strut mount and strut tower was substantially less. 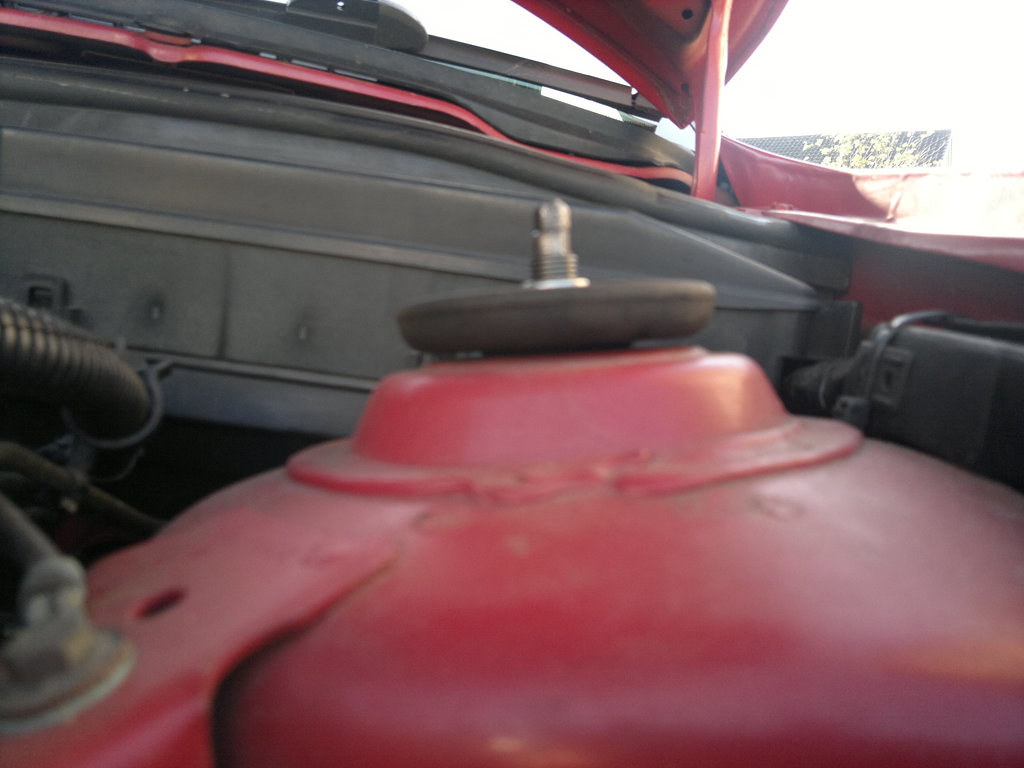