Hoping to be at Blyton Park on 24th September
0 x
http://www.track-addict.co.uk
http://instagram.com/trackaddict
Top

Once again a good while with no changes (nearly 3 months) but got some bits done today.

10mm axle spacer swapped over for 30mm billet ones, sits beautiful at the rear and hopefully provides more stability with the extra 40mm of track.

after (rears and fronts in line)

Re-greased offside drum bearing as was looking dry, also replaced oem exhaust mounts for orange poly ones which you can see in the photo.

Had a goosey at the front pads and unfortunately due to the high ferrous content of the DS2500's they had again fairly badly crumbled round the sides and had to choice but replace them with oem pagids, with the super blue fluid and braided lines be interesting to see how they fair on track, plus with winter setting in it would be a lot safer running them as I have to admit the ferodo's were really quite wooden in the cold on the road!

At Snetterton this Tuesday so will get some action pics up that evening.
0 x

Didn't have any track shots but here's a selfie on the day..

When Scott was selling his trackday car I brought his fibreglass bonnet off him (this was the first mould from the member once known as kizza) my plan was to wrap it but it needed quite a bit of filling and sanding first, its mostly a single skin but has the double skin hinge fitment with two support bars running through it, II will break this all off at some point and fit using 4 pins but for today I just wanted to get it on.

Other jobs I did was covered the drivers well with griptape so no more squeaking and slipping feet.

You may notice on the wing mirrors from the photos in last post some small black fins to 'help' aero.
0 x

Oh and I have a 1.7 turbo engine in the shed! (which I'll likely just be pinching the ported&polished head off)

stuvy wrote: What's your 1.7 turbo built up from?

Sorry to pester but what turbo and pistons/crank are you running? Lastly did you do the work yourself?
0 x
Top

stuvy wrote: Sorry to pester but what turbo and pistons/crank are you running? Lastly did you do the work yourself?

I brought the engine as you see it in the photo recently (i.e without turbo) no forged internals but ran 180bhp.

I'm not a mechanic/engineer so wouldn't attempt any work on it. I brought it purely for the head and will be selling the rest on (likely replacing the head) If you're interested (or fancy twisting my arm with the head) pm me

Had lots of wrap left over so did the bumper 'lip' too, getting used to this wrapping malarkey.

Bonnet is looking really nice Neil! Good job on the wrapping. Keep up the good work

One question though: are you allowed to have those flaps when driving on public roads (danger to passengers and pets etc...)?
0 x
Project JASAPP
http://www.projectpuma.com/viewtopic.ph ... 70#p327270
Top

Made a very good job of the bonnet and catches!
0 x
http://www.track-addict.co.uk
http://instagram.com/trackaddict
Top

One question though: are you allowed to have those flaps when driving on public roads (danger to passengers and pets etc...)?

Reasonable question, probably not but I'm not sure on them being 'illegal' they don't extend passed the front arches but can easily remove them so probably will do from now on just in case.

Made a very good job of the bonnet and catches!

That bumper infill was 20 times harder than the bonnet I tell you.
0 x

Rockingham Garage on Sat, took vids but after uploading them once I got home I discover the camera had dropped down and all I captured was the passenger headrest lol, further track pics here for which I might buy a few

Some good varied pics there from rockingham. Car is looking great!
0 x
Top

A few good photos of the little silver Puma being chased down by a rather savage Blue Fiesta.....
0 x
Top

I said to myself this year will be the year I use the car on track more than ever but I haven't been out yet, trying to save to buy my first house doesn't help mind!

Anyway tomorrow I'm going to get stuck in and work on the car.

One major issue is no brake bias, was locking rears a lot at Rockingham without braking particularly heavily (although it was wet so that obviously added to it) due to running 30mm billet axle spacers my self-test would constantly lock the wheels up and absolutely couldn't have that so I remember pulling both the green 30a abs pump fuse and pink 3a module fuse so thinking (and I may be very wrong) but if I replace the 3a I 'may' have the bias working again, if not I have a non-abs mk4 Master Cylinder and matching Servo but will need to get new lines made up.

Gathered some bargain goodies and selling stuff that's being replaced to mainly fund new tyres but also some toward future track days.

First off is my Sparco Rev's, they're very narrow and although light as feck 6kg, my love handles don't agree now and I'm getting back ache from my shoulders being so squashed so they're up for sale and two wider Cobra Imola Pro's going in with much better support! these are 8kg each and almost brand new out a rally car, got one in before the light failed today and get the other in tomorrow on fixed new alloy side mounts (which should offset the weight difference a bit) 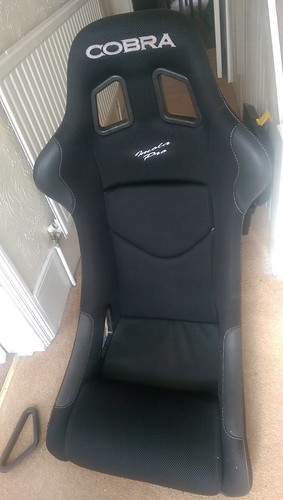 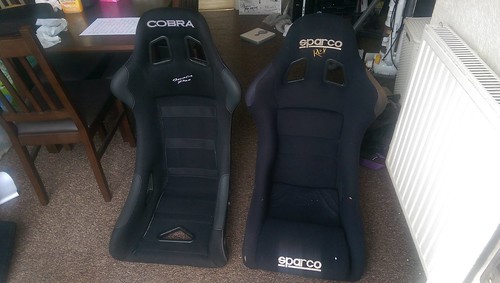 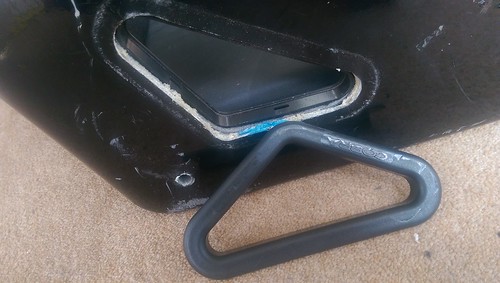 Next up wheels. Earlier in my thread I bagged a steal on ebay for a set of mint condition 15" 7J ford 'momo arrow type' alloys in KTM orange wrapped in R888's GG tyres.

Although they're awesome in may ways they're over 16kg each, I imagine most due to the width (and that with half worn tyres) so wanted to revert to lighter oem puma wheels. I've had 9-spokes and went clown crazy on a set of fan type's so especially with Stewarts recommendation a managed to bag a set of straight and true F1's with 6mm TR1's for £30! These weigh 14kg. 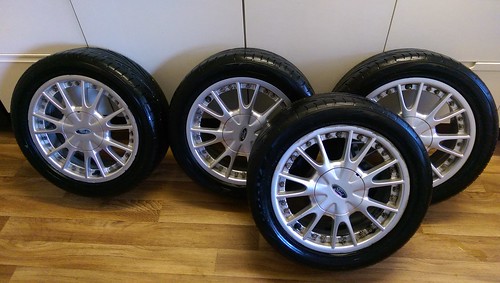 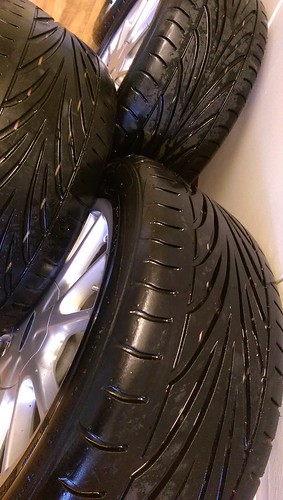 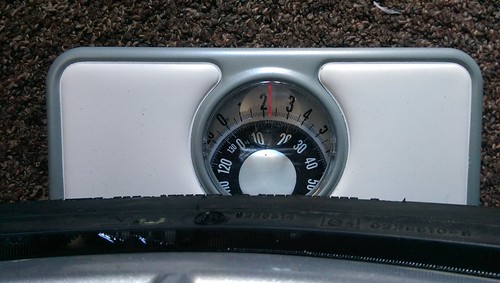 centre cap weight so they may stay off 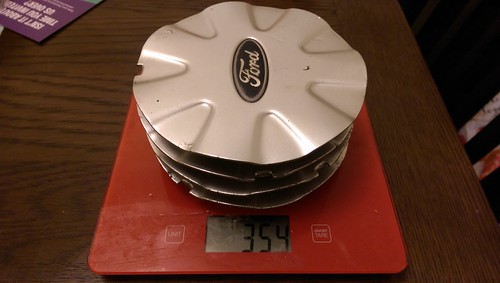 Front bumper coming off tomorrow, modified 'bumper splitter' going on (so real splitter support rods can go through) other seat going in, TR1 coming off the F1's and may make a start with refurbishing, also upgrading the ignition system, got some 8mm magnecor leads and genuine motorcraft plugs (these produce a greater spark with 1.3mm gap although coilpack life depreciates)
2 x

Got the driver seat in, this took quite a bit of experimentation to get my position just right.

It keep raining heavy on and off all day (and currently) so didn't get round to much else. 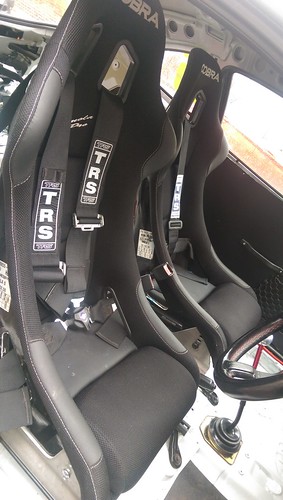 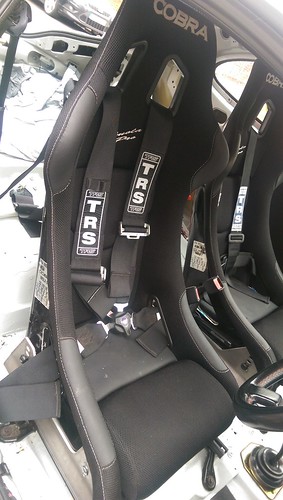 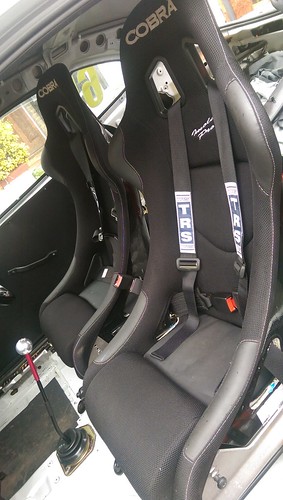 I'm sorry to bother but looking for some help regarding the Turini 16"s.

What is the offset of the ones you have?

HampusSoder wrote: I'm sorry to bother but looking for some help regarding the Turini 16"s.

What is the offset of the ones you have?

Hi, wasn't ignoring your Q just hadn't been on here for a while. They were advertised as ET35 but when I turned up at the guys house they were ET42 (this was years ago!) I've noticed zero difference on the road, I tend to only use them on track if its wet (as they're are wrapped in Rainsports) years of different peoples experiences with different offsets on here, ET28 would handle better then ET42 (although obviously ET34/35 would be ideal)
0 x

6 months has passed so time for a wee update:

Cars been sitting since a brought my first house on 31st July and I shouldn't have been surprised I couldn't start it yesterday.

With jump leads not the easiest with the battery in the middle of the car I searched amazon for a battery jump unit on 'prime' so I could get it over to the garage today and came across this:

Wasn't that convinced initially from its size but the reviews convinced me otherwise. Its about the size of a small portable HHD and the build quality is brilliant and came with its own case.

It arrived half charged (instructions said it should have at least three blue bars lit (it had two) but thought I'd give it a go, started straight away and apparently will work up to 15 times over without needing another full charge, well happy with it and sure it will rescue me again during the winter track season.

Anyway its now in the garage to have the remaining two vibratechnics engine/gearbox mounts fitted so I'll be running the full set, woohoo race car buzz! also looking forward to how much more positive it will feel to throw the car about at Snetterton next weekend.

Also having at bash at improving the brakes and pedal feel so a mk3 mondeo servo and master cylinder being fitted (with 2 custom stainless flexi lines solving the issue of needing to bend the lines shooting the opposite way out the mondeo cylinder) also having the abs module/pump replaced (could be air in, unsure) and fresh 'super blue' racing fluid bled through.

Other small jobs are magnecor blue ht leads, new NGK iridium plugs oh and a new k&n panel filter (£15 ebay steal!) the rear coilovers are dropping another 10mm and if the garage has time before Ford Power Live the air-con may get removed and the smaller aux belt fitted.

Will post photos once its back with me.
1 x